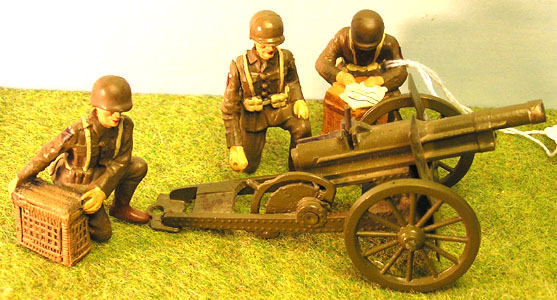 “Show me a soldier who’s not bitching and I’ll show you a soldier that is a liar,” said someone, once, maybe. Regardless of the truth of this statement, any commander knows that when soldiers stop complaining then things are getting dangerous. Complaining, bitching, kvetching, whatever you want to call it, it is a staple of being in the military.

But you know, sometimes we take it too far. Sometimes we can get dominated and overrun by all the bad stuff we see around us and forget about the good things in our organizations. Therefore, I give you, in the spirit of all things Buzzfeed, my top ten reasons I am thankful for joining the U.S. Army.

One of my first realizations about NCOs was that they were apparently all required to be funny bastards. My drill sergeants at Fort Benning could’ve all been standup comedians, albeit comedians with anger issues and the ungodly ability to ruck march farther and faster than anyone. After more time in the organization, I realized that humor is the Army’s second language. Jokesters and story-tellers are our heroes, since that’s how you get through the incredible boredom and occasional terror of military life.  Bill Mauldin understood this, by the way.  The legendary World War II cartoonist captured the innate humor that lies dormant within every grunt.  And he’s still remarkably relevant to this day.

“Join the Army and see the world, but only the places that suck.” This is an age-old joke that has a profound and disturbing meaning. It’s as if the Army actually modeled its base plan off of this philosophy. I thought that maybe I would get exotic travel to Europe or Africa. Instead I got Rolla, Missouri (home of the Waffle House that uses the Cheese that Refuses to Melt) and Columbus, Georgia. Oh, and Afghanistan, which is also a delightful vacation spot.

The longer you stay in the Army, the more you realize that the acronyms will never end. Every single branch has its own unique acronyms, some that are so long that it boggles the mind. Thanks to the Army, I can now communicate almost entirely in acronyms. Which actually PREVENTS communication, so that’s cool.

No matter what branch of the military you are in, you will stand in lines. For everything. For medical appointments, for the rifle range, for the commander, for the bathroom, for the chow hall. Hell, sometimes you just get into a line that is forming because it seems like the thing to do. When it doubt, form a line. Or sit on the ground and throw rocks at other rocks. Which leads me to…

If nothing else, the Army teaches you time management. You learn to be early, and how to schedule your entire day so as to always be on time. Truthfully, this is a skill that I value quite a lot, as it has paid dividends in all aspects of my life. Except it makes my wife want to punch me, at times. The Army also teaches you how to manage your time when you are doing nothing at all. Which, to be honest, encompasses a ridiculous amount of time, whether in garrison or in the field. See “Standing in Lines” and “Sense of Humor.”

Man, nothing makes me more pleased than to do PT all the time. I am lying profusely when I say that. However, I am thankful to have a profession that requires me to be fit, because I am not naturally a fitness person. It also allows me to evilly grin when the fit guys I went to college with begin to balloon out as they become family men.

I am contractually obligated by Army Regulation 25-50 to remark on just how much I love Arial 12 point font and how it brings order to an otherwise chaotic world of ungoverned font choices. In the words of William Tecumseh Sherman, “War is all Helvetica. Let us make it Arial.”

You really didn’t think this was going to make it on here, did you? PowerPoint. My nemesis. The crutch upon which the foundation of Army instruction teeters. The wall that obstructs critical thinking and understanding. The blunt object that…well, you get the picture by now. Still, the Army has taught me a lot with PowerPoint. Not that it is effective, but how to avoid it. Briefing coherently and effectively without slides shocks senior leaders and confuses them. Which is pretty much my favorite tactic anyways.

Okay, this one is for real now. I am deeply thankful to the Army for my education. Thanks to ROTC, I was able to get my masters degree without accruing any debt. This thankfulness is also tinged with some sadness, as I now see the programs that I used with such excellent benefit being downsized and cut. Education benefits improve both the soldiers and the organization. A degree has greater lasting value than many other military programs. Couldn’t we just cut, oh, I don’t know, the West Point football program to pay for continuing education benefits? It’s not like they can beat Navy as it is. Which of course brings me to…

Golly do I love snark. It has become like a second language to me. Snark was taught to me by jaded and cynical officers, most coming out of a term in staff. They taught me the value of the sardonic smile, the witty quip, the under-the-breath sarcasm, and the equally important sarcastic laugh. Snark is what gets me through the day sometimes. It is like humor, just more so. It serves as the “Survive” in my ethereal world of SERE that I engage in as a staff officer.