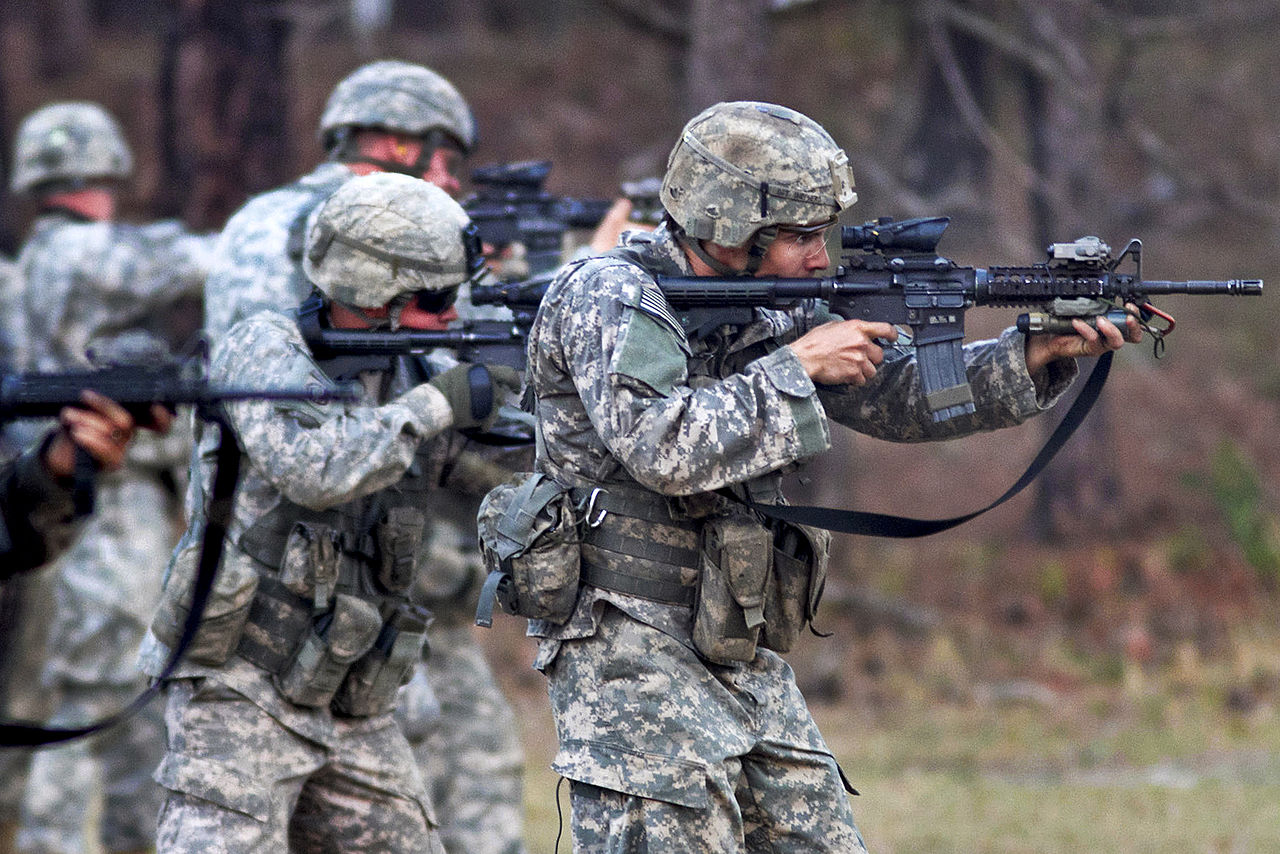 Let’s have a little chat about readiness. To be more specific, let’s talk Army National Guard readiness. First of all, what does readiness even mean? The word is being tossed around like a football these days (that’s American football to you other folks who refuse to acknowledge our arbitrary break with the rest of the world). Both the Army Chief of Staff General Mark Milley and Command Sergeant Major of the Army Daniel Dailey state that readiness is our number one priority and that the Army is being stressed beyond its limits to meet global requirements even as the Army shrinks in size. Is that accurate? How is a force of 450,000 active duty soldiers stressed? And how does readiness play into this?

First off, we’ll break down what that word means. The Army defines a ready unit as one that can deploy to a combat environment and accomplish its mission. Simple, right? What is not so simple is what goes into making a unit ready. It’s broken down into several parts: manning, equipping, and training. Each unit is assigned a modification table of organization and equipment, commonly called an MTOE, because we love acronyms. The MTOE lists exactly how many soldiers a unit should have, by job type, what equipment the unit should have, and how the unit is broken down into sections (companies, platoons, squads, and teams).

A unit has to have the right number of soldiers assigned to fill it to its authorized strength. In addition, those soldiers need to be the correct military occupational specialty for their assigned position within the unit. For example, an infantry company contains not only infantrymen, but also cooks, mechanics, and supply and administrative personnel. The soldiers need to not only be present, but also be healthy, able to pass their physical fitness requirements, and not have any adverse legal issues. That’s the manning piece.

Equipping is pretty simple. The unit needs to have the right equipment to accomplish its assigned mission. A heavy construction company needs to have bulldozers, excavators, front end loaders, as well as trucks and trailers so that it can move itself. An aviation unit needs to have the appropriate type of aircraft for its mission; it would do no good for an aerial MEDEVAC company to have attack helicopters. In addition, this equipment must be maintained to be fully mission capable so maintenance is critical to maintaining equipment readiness.

Last but most certainly not least is training. Where manning and equipping unit can be evaluated fairly objectively (soldiers present? Check. Equipment present and working? Check), training is harder to evaluate. Which is why the Army, in its infinite wisdom, gave us a checklist for evaluating training and a list of mission essential tasks that each unit must train on to accomplish, you guessed it, their mission. Soldiers train on individual tasks and then move on to collective tasks, constantly being evaluated by their leadership and outside individuals. The end goal is for the unit to be trained in their key collective tasks that support their mission essential tasks. It’s a lot of jargon, but that’s what training management boils down to.

These three categories are constantly being measured and evaluated through Army-wide unit status reports, where all units are graded on the same basis. The unit status report provides unit commanders with snapshots of how ready their units are to deploy. Units are given benchmarks to meet correlating with their place in the Army Force Generation cycle (ARFORGEN), aka, the time a unit spends deployed versus how much time they are at home training. The ARFORGEN cycle is about to be replaced by the Sustained Readiness Model, but the basic principles remain the same: you tier your training to be ready to deploy by a certain date.

At this point, if you’re still reading, your eyes are getting sleepy and you’re wondering why you clicked on this link. Here’s the bottom line buried in the middle: the Army is banging the readiness drum because they don’t have enough forces to both accomplish their mission and be ready for the big WHAT IF scenario that keeps the 82nd Airborne Division up at night (actually it’s the bars in Fayetteville that do that). According to our deployment policy, for every unit deployed, two more are training to deploy. And that’s just counting deployable troops, not the thousands of soldiers serving in non-deployable administrative and logistical positions. Oh, and there’s all those who can’t deploy for the aforementioned medical, physical, or legal issues. With a target of 450,000 (by 2018) in the active Army, 50,000 are not deployable for the above reasons, according to Sergeant Major of the Army Dailey. And he’s pretty pissed about that number: “If you will not or cannot fight and win, then there’s no place for you in the Army.”

So that 450,000 might look pretty good, but if you subtract 50,000 non-deployable soldiers, another, say, 50,000 (full disclosure, that’s a rough swag estimate) who are in administrative and logistical positions in headquarters units and supply depots, our forward stationed troops manning permanent outposts such as Korea, Sinai, and Kosovo, and all of a sudden the Army can only deploy about 100,000 troops in a given year. And if you wanted combat troops, that number drops down to around 25-30,000 trigger-pullers. Oh, and take away a few brigade combat teams that are on “DEFCON OH SH-T” duty as a quick reaction force, and the number shrinks even smaller. This is what General Milley means when he says the active force is stretched thin and why readiness matters more than ever. We need all the troops that we have to be trained, manned, and equipped so that we can make best use of our force. It’s also why he says we need to rely more on the National Guard and Army Reserve.

On February 29, 2016, the Army requested from Congress nearly double their usual monetary appropriations to deploy National Guard and Reserve soldiers in 2017. To be fair, this is what National Guard leadership has been asking for. But is the National Guard ready? Can they deploy ready units in a timely fashion to meet Army timelines?

This is where the rubber meets the road for National Guard units. Personnel and equipping are fairly simple to do in the Guard, generally speaking; training is the hard part. In the thirty-nine training days authorized for National Guard units, they have to train on their mission essential tasks, as well as complete all mandatory training requirements. But that’s not the full picture. Because of cuts to funding, Guard soldiers who need to attend an Army school (military occupational specialty qualification, professional military education, leadership courses such as Ranger or Sapper, or “cool guy” schools like airborne, air assault, and pathfinder) cannot then attend annual training as well. Annual training is a two-week period where National Guard unit get the most “bang for their buck,” as the units can conduct realistic training over a sustained duration of time. Missing key leaders during annual training degrades unit readiness. Additionally, soldiers often have to split-train on drill weekends to go to in-state courses such as combat lifesaver, hazardous materials handler, and unit public affairs representative, to name only a few. Each unit is also required to have trainers who can teach the mandatory classes, such as sexual harassment and assault prevention, resiliency training, and equal opportunity training. Thus, many soldiers are absent from their unit because they have to attend this training on drill weekends as there is no funding to conduct it during the rest of the month. And that’s not counting those with medical issues who have to go to their Army medical appointments over drill weekends.

So, back to my original question: is the Guard ready? As an immediate reaction force, not really. Can it be, with proper funding? Hell yes (the expletive added for emphasis, as I am proud Guardsman). This has been demonstrated over and over again during the Global War on Terror, as hundreds of thousands of National Guard soldiers mobilized and deployed. However, each unit did so with a two-month train-up to get their readiness levels and training on par with mission requirements. The thirty-nine training days a year are just not enough time for National Guard units to be at the same readiness levels as their active duty counterparts.

The Army recognizes this; General Milley particularly so. He and the Director of the Army National Guard Lieutenant General Timothy Kadavy have spoken openly about their desire to increase the number of training days for National Guard units. Perhaps even doubling them. This would reduce a lot of stress on unit commanders to try to pack ten pounds of requirements into a two pound bag. Is adding more training days the answer, though?

One of the main draws to the National Guard and Reserve is the limited time commitment. New soldiers join expecting to deploy, so that is not an issue. But if you start taking them away from their jobs regularly, for longer periods of time, both Guard personnel, families, and employers will start to complain. It could even risk driving employers away from hiring Guard or Reserve personnel and trying to find workarounds against the legal protection reserve component service members have. One can hardly fault employers for being wary, as their Guard employees often fill critical roles within their organizations.

If the Army does go this route, one possible solution might be to offer significant tax incentives to companies that employ Guard members. Still, the added training days could negatively impact recruiting for the National Guard and Reserve. And not only recruitment, but retention, as soldiers joined the National Guard expressly to be part of a part-time force. Implementing this could cause a sustained drain on experienced personnel.

Another solution might just be to increase funding for National Guard training, sending soldiers to necessary schools and allowing them to still attend annual training. Additional funding could help the select service members attend required training at times that are not on drill weekends, freeing them up for unit training. Adding additional training days before drill weekends for just unit leadership could also maximize the time spent training during the weekends without impacting the majority of the force. Either of these solutions are going to cost money, which, if you’ve noticed, is scarcely forthcoming from Congress these days.

It is clear that there needs to be a solution somewhere. The Army faces a growing number of requirements around the world and needs to act as one total force to be able to meet those requirements while still standing ready to deter enemy aggression. While we need to increase the Guard’s readiness, we should strive to do so in a way that takes into account our citizen-soldier’s connections to their community – their family and employer.

Enjoy what you just read? Please share on social media using the buttons below.

4 Replies to “What is Readiness and How Do We Get There?”