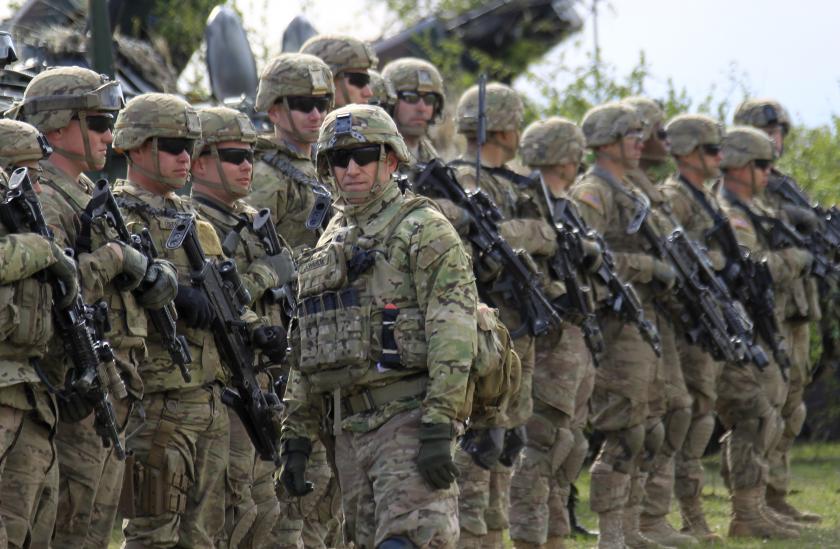 “War is a human endeavor—a fundamentally human clash of wills often fought among populations. It is not a mechanical process that can be controlled precisely, or even mostly, by machines, statistics, or laws that cover operations in carefully controlled and predictable environments. Fundamentally, all war is about changing human behavior. It is both a contest of wills and a contest of intellect between two or more sides in a conflict, with each trying to alter the behavior of the other side. Success in operations is often determined by a leader’s ability to outthink an opponent to gain and maintain the initiative. The side that forecasts better, learns and adapts more rapidly, thinks more clearly, decides and acts more quickly, and is comfortable operating with uncertainty stands the greatest chance to seize, retain, and exploit the initiative in order to succeed over an opponent.” – Army Doctrine Publication 3-0, Operations

This is paragraph seven of the Army’s Operations publication, and the doctrine writers really buried the lede here, because this is the one core component of war that leaders need to understand. And I’m not sure that we place enough emphasis on it.

I’ve often said that 90% of being a military leader is understanding people. The other 10% is technical, tactical, or procedural knowledge. That 10% can be taught, often quickly and easily. It doesn’t take a genius to plot artillery coordinates, place explosives to crater a road, boresight the main gun on a tank, pilot a helicopter, or maneuver an infantry platoon from point A to point B.  We usually teach these tasks to new lieutenants in anywhere from 3-5 months.

90% of being a military leader is understanding people.

What takes more thought – and is proportionately more difficult  – is figuring out how your artillery rounds will affect the enemy soldiers’ morale, knowing whether or not that road you’re cratering is the main route locals use to get to the market, or how to influence your infantry platoon to go from a humanitarian aid mission in one moment to the application of deadly firepower against enemy forces the next. We too often get wrapped around the axle in the technical aspect of our roles, trying to drill and train our troops to perform tasks to the letter. During after action reviews, most comments on “what went wrong” are focused on how to prevent that action from happening in the future, not “what was the reaction that ultimately overcame the adversity.”

Because as the excerpt above demonstrates, war is not a set piece. Our doctrine and tactics are there to be a base of knowledge, yes, but the one who wins the fight will be the person who can break out of the expected and do the unexpected. Doctrine provides the science of war; understanding the human aspect is the art of it.

Key to the art of war, I would argue, is understanding how people work, what makes them tick, what motivates them, and what their limits are. Since every person is different, there is no cookie-cutter way of doing this. Being that the Army operates off of determined processes, this clashes with the military culture. How do you teach innovation and adaptivity when you operate in a disciplined and regimented environment, much of which is bound up with risk aversion? And how do you break out of the rigid mold of data-driven decision making?

The Army has processes in place to try to formulize the human dimension. These come in the form of analyses like Mission, Enemy, Terrain and Weather, Troops, Time, and Civil Considerations (METT-TC) and Political, Military, Economic, Social, Information, Infrastructure, Physical Environment, and Time (PMESII-PT). While these formulas produce useful data, the data does not tell you the “why” and “what next.” Commanders can be overwhelmed by data, clouding the human aspect of warfighting. If war is about changing human behavior, data is essential to inform a commander but cannot on its own provide the key to victory. The commander must be able to translate data into plans and orders that motivate their troops to impose the commander’s will on the enemy to make them (the enemy) choose their least preferable option.

To do this, you must be able to work with people: to be able to communicate effectively, to invest time in people, and to actually understand their motivations and work to align their motivations and your intent.  It’s what the Army calls “building cohesive teams,” and what the rest of us might call simple networking. Except at the end of the day, you expect your network to bring a massive amount of combat power to bear on other human beings and kill them, while risking their own lives in the process.

This is where war as a human endeavor becomes incredibly distinct from any other human endeavor; it involves the fairly inhuman aspect of taking life. So in addition to everything else – knowing your own troops, knowing the enemy, knowing the environment, knowing yourself – you also have to factor in the moral and ethical implications of your actions. This involves not losing your moral center – as Phil Klay excellently outlined in his recent New York Times article “What We’re Fighting For” – even in the midst of what seems like an amoral situation. The precise and proportional use of deadly force is not only a moral imperative that often serves to separate us from those we fight, but is also key for morale and gaining victory. So much of what we do is translated through the optics of public perception – and as an all-volunteer force, operating in the service of the people of the United States, that perception can lose us the war even if we “win” on the battlefield.

To use current examples of war, much of what the public sees of warfighting now is heavily technology-based: gun camera footage, drone strikes, and satellite imagery. This does two things.

One, it removes the human aspect from war, making it seem as though technology is key to victory. Technology is a crutch, upon which we rest too much of our hope for future victories. And it makes the public believe that if we don’t have the most up-to-date technology, we are at a disadvantage. As we move towards an era of unmanned systems, we remove our edge of being able to leverage the human aspect of war. All the drone footage in the world does us no good if the commander does not understand what she or he is looking at. We have also become overly dependent on technology and expect that technical superiority translates into victory on the battlefield. If this was the case, operations in Afghanistan would have ended years ago. Many point to U.S. success in Desert Storm as a vindication of superior technology on the battlefield. While holding the technological advantage helped, it was the superior training and motivation of U.S. troops that proved most effective, as well as the intuition of General Norman Schwarzkopf, who accurately read his enemy’s intentions.

We have also become overly dependent on technology and expect that technical superiority translates into victory on the battlefield.

Secondly, it translates war into a numbers game. Perhaps, thinks the American public, if we kill enough of the enemy through drone strikes or Special Operations raids, we will eventually win. As we learned in Vietnam, and then again in Iraq, kill counts are perhaps the worst way to evaluate success or failure. Humans are emotional animals that get attached to ideas, and war brings out a wide range of emotions. Merely killing people has little impact on an idea. War is fought by humans, and humans have little regard for body counts – otherwise we would’ve stopped fighting wars a long time ago.

Know yourself, know your troops, know the enemy, and know the endstate. We’re lucky if we get two out of those four right. The successful leader must be able to navigate the entire spectrum of military operations and human behavior.  Which is no simple task – in fact, it’s incredibly difficult. To pretend otherwise is to delude ourselves. However, it should be the goal at all echelons of leadership within the Army. Which then leads to the question, how do you train leaders to understand war as a human endeavor?

Know yourself, know your troops, know the enemy, and know the endstate.

Really, you can never be a “T” – trained – at the art of war. It is a never-ending learning process, which is why there is a profession of arms in the first place. Human actions change, therefore how wars are fought changes. Continuous and unrelenting self-study is critical. History serves as our guide with this, since history is merely the story of human actions written out across time. It encapsulates all the things that motivate people – sociology, economics, culture, and demography.  We learn from our own observations as well as those of others. Mentorship helps build relationships and guide our observations. A thirst for knowledge and for continuous improvement is a must.

The Army has a critical gap in training – or even study – on the human aspect of war. One reason for this is that – as mentioned earlier – the Army demands formulaic answers and processes. This is the weakness – in my opinion – of the Army’s attempt to bridge this gap: the Human Dimension Concept. It became too technical for the entire force to understand and too formulaic to meet the endstate. It became training, which does not fully encompass the broad spectrum of human experience. If we truly expect to maintain our competitive edge in war during a time where technology is evolving faster than our ability to keep up with it, we need to invest in building leaders who can master the human terrain of warfare.

2 Replies to “War as a Human Endeavor: How do we train for that?”