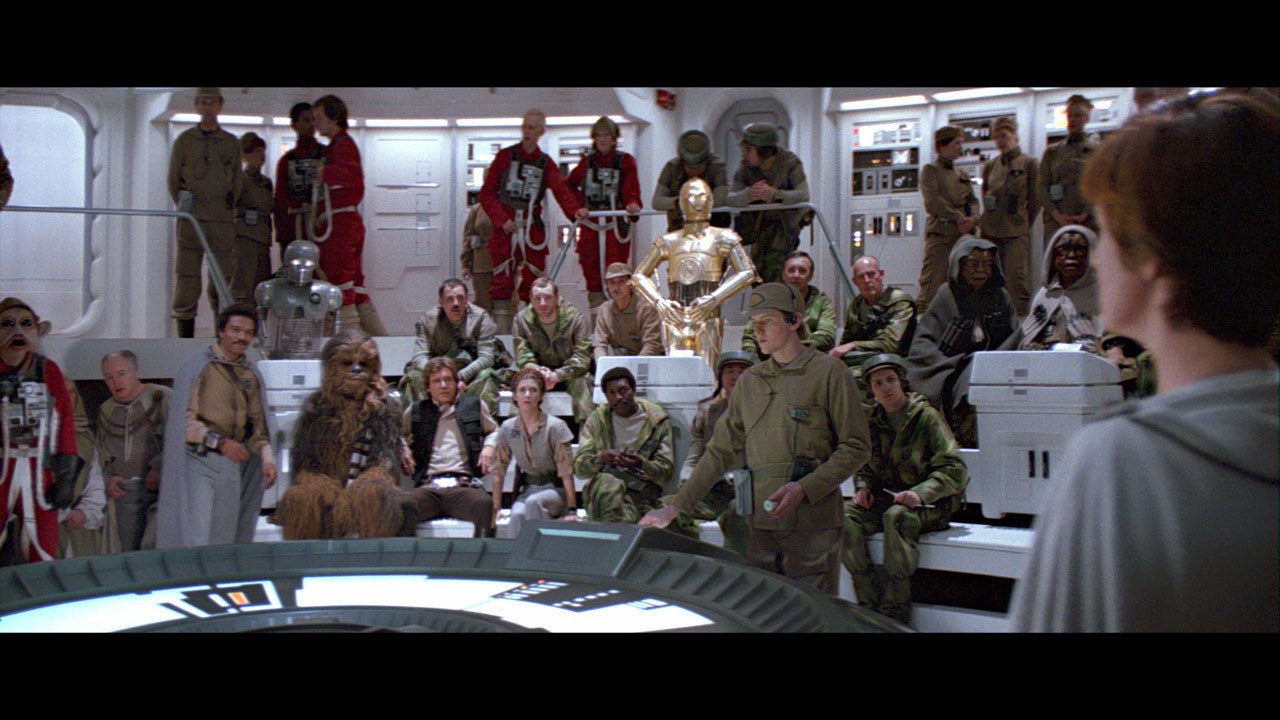 The Star Wars saga is iconic, whether it’s the original movies or the much deliberated prequels and sequels. Love them or hate them, each movie has iconic scenes that ensnare the mind. I was too young to see the original trilogy in theaters, but I saw the prequels and sequels in theaters and all nine movies sold me a tale of heroism and bravery. But they also sold me the idea that battles and wars were won by a handful of General Officers sitting around a table making detailed decisions about the war.

What a crock of shit.

Sure, Generals and Admirals drive the conflict. They have the big, overarching vision of how the war should go. That said, they aren’t tacticians and Star Wars lied to me!

It’s not the Generals and Admirals, resplendent in their perfectly pressed uniforms or artfully crafted Rebel style, who write strategy. No, it’s some poor neglected Rebel equivalent of a staff weenie making best guesses in the back of an Empire cubical farm of Rebel hangar deck.

The Lie: The Generals/Admirals stand around a big sand table and hash out their grand plan. Maybe one heroic intelligence officer/spy arrives with the critical piece of information, just in time to seal the deal.

The Reality: Five underpaid, unappreciated Rebel staff weenies frantically try to pull information from other bases about supply lines, X-Wing maintenance rates, and transport pilot availability. There are no intelligence officers, they’re making best guesses as they go, and are probably all considering joining the Empire if it means a bed that isn’t a pile of blankets on a crate. By the time the plan gets to the Generals and Admirals, they give a quick “yeah, looks good” and waltz off to their meeting. At the meetings, they spend 5% of the time listening to the others for conflict and 95% of the time wondering if they’re eligible to retire and “how hard out it really be to run a dive bar on Canto Bight?”

The above is a very basic outline of The Lie but it can be seen in each set of trilogies, thus ensuring each generation is duped into believing this outrageous falsehood.

The Lie: Mon Mothma and General Dodonna brief their plan directly to the pilots.

The Truth: Four harried, grimy, and exhausted people cooked up this plan in a half lit, unused storage room on Yavin 4. Two  X-Wing pilots and one transport pilot, all too DNIF to fly were joined by one Rebel maintenance officer who bitched about the pilots the whole time, and spent the 48 hours before the battle scanning the Death Star plans. Bleary from lack of sleep, they hand a crudely sketched holo-point to Mon Momtha and General Dodonna, both offensively clean and wakeful, just before the pair walked into the briefing with only a quickly muttered “Exhaust ports, ya gotta hit those. Big boom. Whole thing goes…” before promptly passing out on any available flat surface including a crate full of munitions.

“The Force is real, right?” one pilot muttered later.

“Sure, it’s got to be,” the Rebel maintenance officer told him as he knocked back his seventh shot of liquor, something he’d been brewing in his room with spare parts from the X-Wings and a start cart.

“How’d ya know?” the transport pilot asked, face still haggard from the scanning and planning marathon.

“It must be. Our plan was shit!” the maintenance officer said and promptly passed out into his drink.

Case 2, the prequel trilogy: Episode I, The Phantom Menace

The Lie: Master Qui-Gon Jinn and a young Obi Wan are sent to a Federation flagship to resolve a trade dispute. Rather than settle things politically, they engage in “aggressive negotiations.”

The Truth: Galactic Republic strategic planners spent frantic weeks secretly engaging with politicians for a backdoor negotiation. The Jedi Order instead sent a habitual line stepper and his padawan. Somewhere a Republic planner is sobbing into a Coruscant Sunrise crying, “These assholes haven’t read Corbett or Dolman once have they? They have no idea how critical a damn line of communication is!”

The Lie: Hidden away on D’Qar, Rebel forces decipher the plan of… yes, a bigger, better Death Star, Starkiller Base. General Organa stands around with her top Generals and aides, determining how to attack the Death St– err, Starkiller Base and blow it up.

The Truth: Actually, this isn’t far from the truth. Really, the only difference is that instead of immediately sending Han, Chewie, and Finn off to Starkiller, they would have first made Finn, or the lowest ranking officer in the room, sit down at a terminal. General Organa, with six colonels, would have watched over his shoulder as they typed out the plan for dissemination to all available Rebel forces.

Somewhere in a back room off the main floor, a pair of Rebel soldiers discuss whether joining the First Order “might mean actually getting a real bed to sleep in?”

“I mean, I’m not saying I’m defecting or anything but… do you think they get real beds?” one exhausted Rebel officer says to his companion.

“I mean, probably. Those dreadnaughts are pretty big, I’m sure people aren’t more than two or three to a room.” There’s a hopeful air in their voice.

They both stare wistfully into their monitors for a second.

But a brief glance at the other, they know perfectly well their companion would sell the entire disorganized mess of a Rebel order out for a hot meal, a hot shower, a warm bed, and some recognition for all the work they do.

About the Author: KR Paul is the author of “Pantheon” and “Pantheon 2: Ares & Athena” as well as an ultramarathon runner who hasn’t quit her day job yet. She can be found on Twitter @AuthorKRPaul  as well as AuthorKRPaul.com and is known to be a delightful blend of über-jock and bookish nerd. The views expressed are those of the author and do not necessarily reflect the official policy or position of the Air Force or the U.S. government.