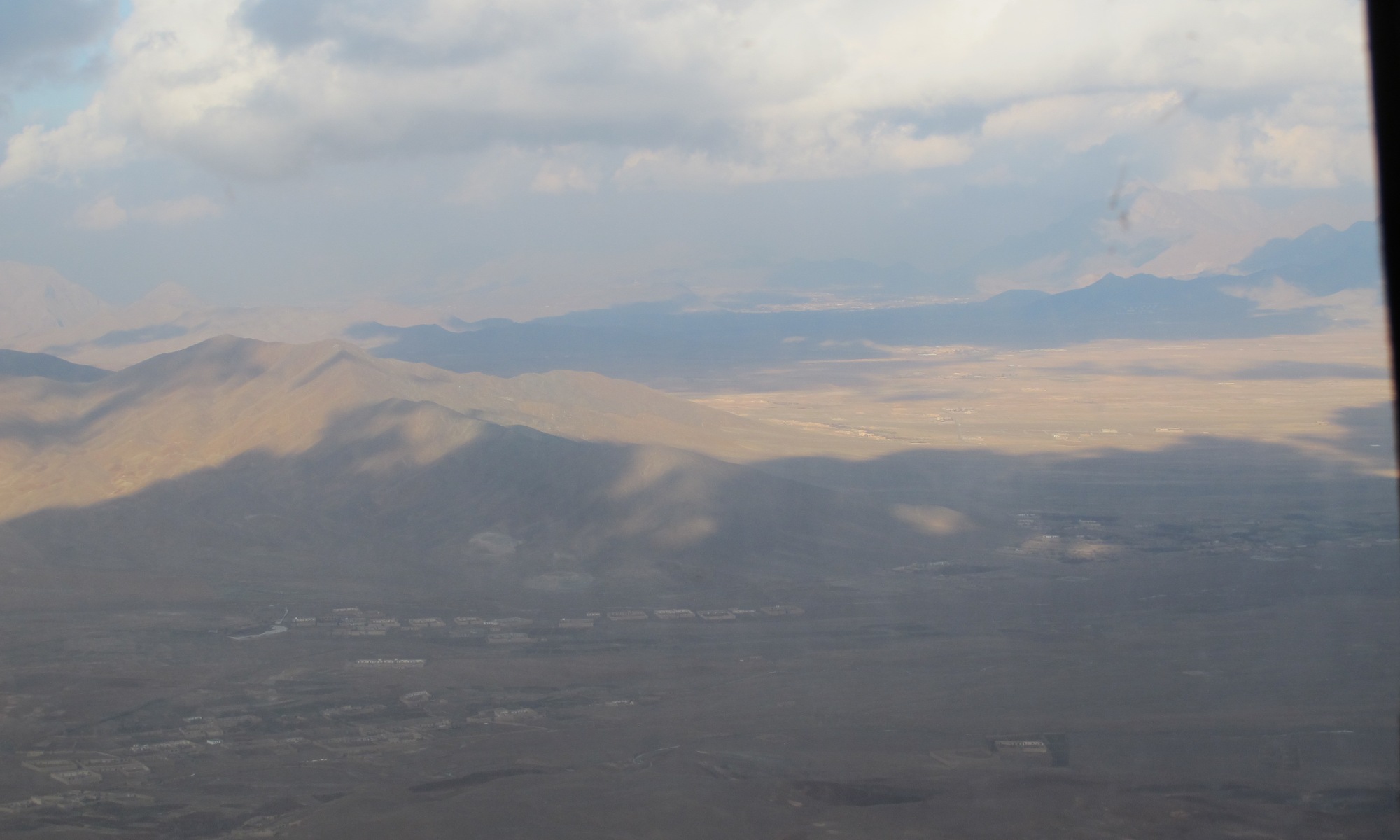 As I boarded my flight yesterday morning I realized that it was my first since my trip home from Afghanistan. As we took off, I looked at the New England countryside disappearing below me and I stared, captivated, at the glorious panorama that is America. It was similar to the way that I would stare out the window during all flights in Afghanistan, where possible, examining terrain and getting a feel for the country. 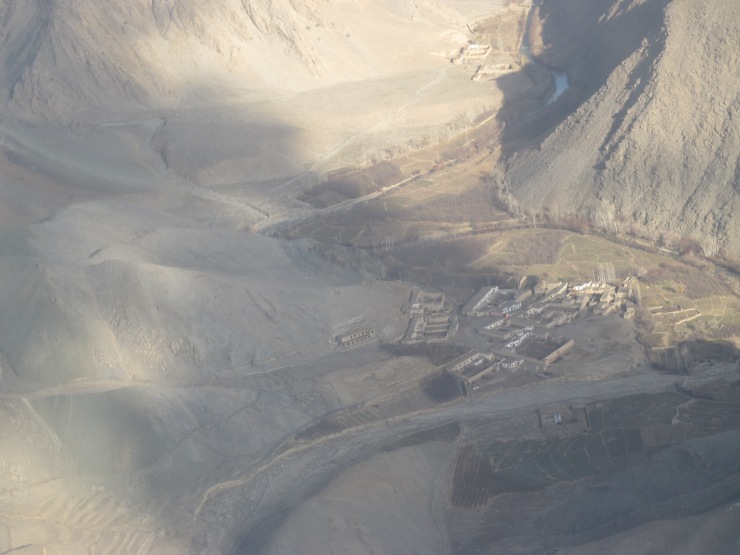 But this was different. In Afghanistan, I was struck by the vast expanses of nothing. Desert, mountains, scrub hills, dotted with small settlements along winding roads, most often through valleys cut with streams or rivers. Jagged mountain peaks and sheer drops of breathtaking beauty broke up the small communities. Flying over a city, like Kabul, one became aware of the presence of hundreds of thousands of people living in an extremely small space. I had never before seen what a city like that could look like and it shocked me. People lived virtually on top of one another, something I never quite saw when traveling through it on the ground. Outside the cities there were often signs of industry, such as the odd-shaped smokestacks of the cement factories that marched in long lines into the distance. Even these carried the unique stamp of Afghanistan, bearing no resemblance to a cement factory one would see in the U.S. All seemed alien and foreign, as if to say, “You are out of place; why are you here?” 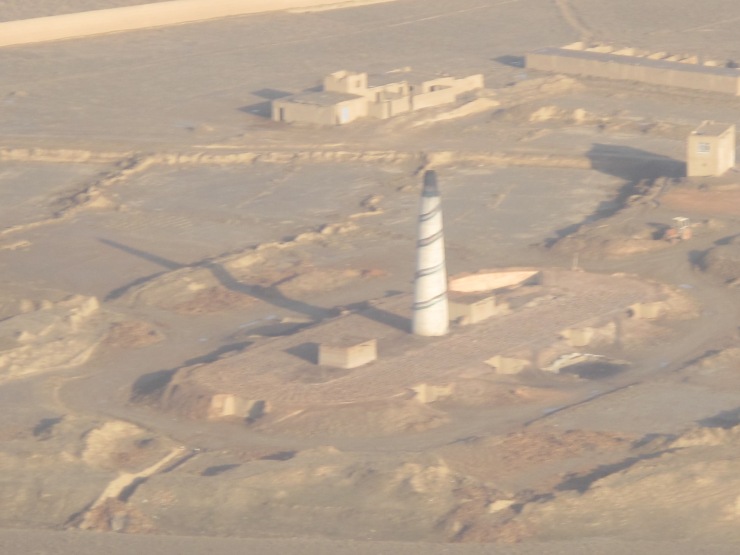 The landscape itself told a story. Here and there were old fortifications, dating from the time of Alexander the Great, the British, and the Soviets. Usually a U.S. base or Afghan National Army compound could be seen nearby. Somehow I was a player in the latest version of the “Great Game.” I felt puny in comparison to the history that was around me. In the air, I was no longer a participant but a spectator. The farmer and his goat by the side of the road, idylls of Afghanistan past and future, seemed to me to have far more impact on the history of the nation than I ever would. 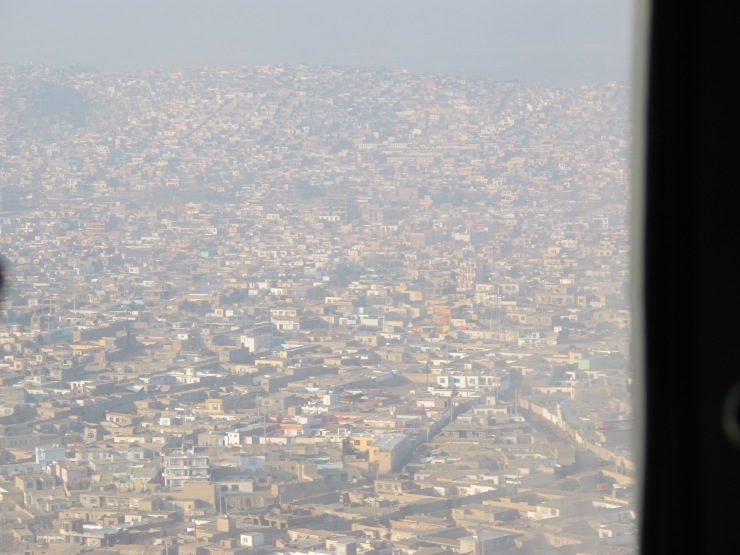 Fast forward a year and a half and I’m sitting in a lovely airliner that neither rattles when it flies nor needs to test fire weapons before it reaches maximum cruising speed. My eyes are glued to the window, because the most beautifully splendid vista is expanding rapidly below.

When I returned home, everyone wanted to know what my favorite thing about being home was. They became confused when I said one of my favorite things was the produce section at the grocery store. It was a sensory explosion: colors, smells, sounds, all wrapped in a cornucopia of delight. This is the best way to compare how I felt when the plane took off.

As long as the ground was visible, I remained at my post at the window. The colossal industrial might of America was tangibly visible: colossal road and port networks, disappearing into the distance as far as the eye could imagine, carrying the goods of every state. The ships of New England loaded with containers plowed out of their berths for ports unknown. The long columns of electric pylons, marked by clear-cut swathes, told the story of electric power that began from the coal of West Virginia or Kentucky. The neat and orderly fields of western New York opened the door to the breadbasket of the nation, the Midwest, revealing green, brown, and yellow squares of agricultural beauty. Silos and farms stretched mile after mile inside geometrically pleasing road networks. This seemingly quaint stretch of land holds the power to feed the nation.

Beyond the infrastructure, the power, and the mass of humanity, just the green of the American landscape brought a profound sense of satisfaction. Being fall, the green was tinged with a fiery red and orange that defied the English language to describe. They say that those who have been starved of food will eat to excess and become sick if allowed to eat all they can. If the soul needs beauty to survive, then I may surely have become soul-sick as I have gorged myself on it in the past year.

Enjoy what you just read? Please help spread the word to new readers by hitting the blue star “Like” button below and sharing it on social media.

One Reply to “Thoughts On Beauty”