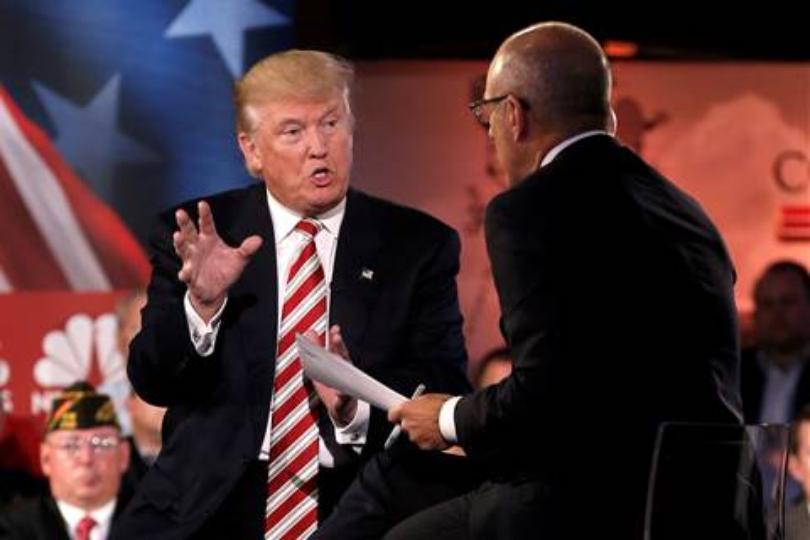 Today’s guest post comes from Barefoot Boomer. Boomer is a career Army officer and strategist. He is also a historian with an emphasis in American and German military history.  The content and opinions of this article are the author’s only and do not reflect the opinions of the United States Army or the Department of Defense.
*disclaimer: The term “generals” used throughout this article covers both generals and admirals for simplicity in explanation

At Wednesday’s NBC Commander-in-Chief Forum, Donald Trump answered questions about national security experience, the generals that supported him, and current military leadership. What he said in response was shocking, confusing, and wrong.

Trump told NBC’s Matt Lauer that the current legion of generals under President Obama are “a pile of rubble” and that once he was President “they’d probably be different generals.”

Trump is big on touting the list of general officers and admirals who support him. He brags about their support and how he’d use them and their vast experience in crafting his foreign policy. Trump insinuates that he’ll use his position as Commander-in-Chief to fire the bad ones and put his own trusted leaders in place. Unfortunately for him, he can’t necessarily do that.

Could a President Trump fire all the generals?

The simple answer is no.

Like all other military officers, generals and admirals cannot be summarily fired from their job just based on their boss, in this case President Trump, not liking them or their opinions. There must be cause for them to be removed, either some type of criminal misconduct or a loss of confidence in their ability to lead or do their job. Any general Trump would want to get rid of would have to retire.

A good example was General MacArthur during the Korean War. MacArthur differed with President Truman on how the war was being waged and he spoke out publicly, including by sending a disparaging letter to Congress. Truman convened his national security advisors and decided to fire him based on disobeying a direct order, a criminal offense. Relieving a general officer of their job is rare, and outright firing is even more so.

The threat of a Trump purge of generals once he takes office is pretty slim to none. He’ll get the ones who are there now.

Could a President Trump appoint anyone he wanted to be a general?

The answer is not really, but he does get a say in the process.

No matter what part of the military they are from, general officers are promoted like any other officer under Title 10 of US Code. They are chosen by the military to fill certain jobs based on their experience and qualifications, sent to the President for approval, and then confirmed by the Senate. So a President Trump could not just place anyone he wanted to into positions of power because, even though he can nominate by approving them, Congress gets the final approval.

Could a President Trump bring a retired general back onto active duty? He could, and there is precedent for it. During the Iraq war in 2003 retired General Pete Schoomaker was brought back by Secretary of Defense Don Rumsfeld to become the Chief of Staff of the Army. So while it’s happened before the chances of it happening again are small. The talent pool of active serving officers is large enough to make it unnecessary.

Also, if you’re worried about Trump appointing a civilian he likes as a general you can rest easy. Generals are not political appointees. During the Civil War, President Lincoln appointed numerous politicians and men seeking power and glory as generals in the Union army. How the army was organized and the political implications of the Civil War made such appointments feasible, but the military of today is no where close to the one we had in the 1860’s.

Generals, like the rest of the military, are not political. We have personal opinions but do not serve based on who the Commander-in-Chief is. The Chairman of the Joint Chiefs of Staff General Dunford gently reminded the military to stay out of politics so we don’t seem to favor one candidate over the other. Retired generals are free to do what they like, but ones that serve must remain agnostic and professional to be able to give the best advice.

A professional military like ours requires professional leaders, not novice political appointees. A General Ivanka or Eric Trump is not in our near future.

Would Patton truly be “spinning in his grave?”

In one back and forth exchange with Matt Lauer, Trump attacked the military leadership under President Obama and their perceived failure to destroy ISIS by saying “ And I can just see the great, as an example, General George Patton, spinning in his grave, as ISIS we can’t beat.” <citation needed> This is a fundamental misunderstanding of not only ISIS as an enemy but also how our national security system works and how wars are fought today.

Invoking the memory of a great leader such as General Patton makes for a good soundbite and plays well with those who yearn for strong leadership. But the fight against ISIS is not the same as the fight against Germany in 1944. Our current campaign against the Islamic State is nuanced and takes into account the difficult geo-political situation in the region. The next Commander in Chief must understand that and act accordingly.

There is also the fundamental idea of civilian control of the military. Generals are not political and don’t only follow orders of the President they voted for. In our system, the civilian leadership sets policy and generals execute that policy, regardless of party. Generals advise their civilian bosses, give them their best military advice on situations, and then execute whatever the President decides.

Patton may be spinning but if he were here he’d do what his Commander-in-Chief ordered him to do.

So, should we really be worried about a President Trump firing and appointing generals as Commander in Chief?

No, it’s not something to worry about.

In the end, a President Trump would have the same powers to appoint and remove generals as every other President has. If he wanted to replace generals with ones he liked better there are no real ways for him to do so outside the established process. Any generals he would get to nominate would not necessarily be “yes men” who would follow his orders blindly. They would still be obligated to give their best advice, even if it’s not what he wants to hear.

But the thing that will prevent Trump, or any other Commander-in-Chief for that matter, from firing and appointing generals if he gets elected is the military bureaucracy itself. The way the military works, the built-in process of promoting, job placement, and firing service members will baffle him (because it’s not like the private sector) and stifle any attempt at changing leadership pell mell.

The convoluted federal bureaucracy may finally be useful for something.

Enjoy what you just read? Please share via social media or email using the buttons below.