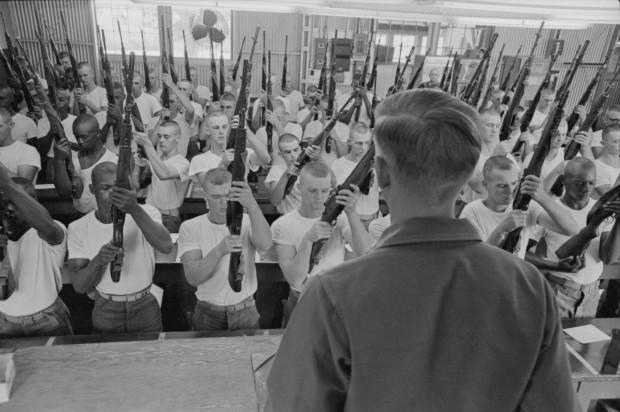 A few weeks back, I was asked to speak to some high school students about the U.S. Army in the post-Vietnam time period. At first I had no idea what I was going to say. How would I get high schoolers fired up about the demise of the Active Defense doctrine and the rise of AirLand Battle? But as a I scanned the era for notable takeaways that I could foist on as-yet-unmolded brains that were still drowsy from lunchtime, I came across one very pertinent point: the end of the draft and the beginning of the all-volunteer force in 1973.

It’s never quite what you’d call “fun” to get up in front of a bunch of high-school students. As a group, they seemed intent on sucking all the life out of the room by not displaying a single iota of emotion. They’re like Dementors for guest lecturers, I guess. So I started off with a simple question. Who could tell me what the Korean War was about?

Followed it up with, “Ok, who can tell me anything at all about the Korean War?” Silence answered silence.

Fortunately, I had expected this. Because at their age, even I – who, I like to think, had an excellent education – would’ve been hard pressed to answer what the root causes of the Korean War were. So, together, we went back in time. We talked about the American Revolution, the Civil War, World War I, World War II – the big wars. The wars where the entire population needed to be leveraged, where all of America went to war. I posited TR Fehrenbach’s theory that all wars prior to Korea could be justified to the American people as a crusade of some type – even the small ones. “Remember the Alamo!” and “Remember the Maine!” come to mind.

But then came Korea. And while Korea was brutal, savage, cost American lives, and used conscription, it was quick. Three years from a very sudden flash to a long drawn-out bang. And unless you were drafted or part of a military family, the war had little influence on you. It was not a whole-of-society approach to war.  It was not a crusade. Sure, it was one part of the larger Cold War against the U.S.S.R., but it was often a faceless type of war that it was hard for people to conceptualize, much like the Global War on Terror of the early 21st century. Korea was over so quickly that war weariness could not set in, as it would later do in Vietnam.

It was during the Vietnam conflict that the American public came face to face with the brutality of modern political armed conflict, waged with the tool of conscription. Two million Americans found themselves drafted into the military and many of them were shipped off to fight in a war that was not even given the dignity of being called a war. And it was here that American society would change the way that the nation would make war. War weariness and social upheaval caused a groundswell of dissatisfaction against the draft; so much so that members of Congress began to take it seriously. Richard Nixon campaigned on his promise to end the draft, and he made good on that between 1971-73.

So, I told the students, the draft was over for Vietnam and hasn’t been used since. Does that mean that all the conflicts are over?

They shook their heads. No.

“Who here was born after September 11, 2001?” I queried. Half the room raised the hands. The other half had been born just before. In other words, as I told them, they were a generation who had known nothing but war. The military being in conflict was normal to them. We talked about how casualties being reported on used to be an earth-shattering, news-stealing moment. How that was never what was considered normal. They seemed interested at this idea, but to them, the wars of today are still far away and have no connection to them. They are fought by other people. Volunteers. And as such, as long as casualties are low, military conflicts can be prosecuted for a very long time without much public interest.

Much like the Korean conflict, if you are not in the military yourself or have a family member in the military, the conflicts of today have no impact on you. Life continues the same. Consumerism roars ahead. Lawns are mowed, trees are trimmed, cars roll along without fuel rationing. We surrender a few personal privacy rights in the name of “security,” but by and large it’s all normal. Unless you’re that kid sitting in a combat outpost on the Syrian border, wondering what life choices brought you to that point.

The students – I think – realize this disconnect, but they do not understand it fully. I asked them to consider not whether it is feasible for the U.S. to conduct unilateral foreign policy, but whether it is right. Whether maybe society should take some more ownership of its military and remove the carte blanche that we have given for the use of military force. And lastly, I asked them to serve, in some way. It doesn’t have to be the military, I said, just do something that helps other people.

There’s a lot of talk inside the military about the so-called “civil-military divide.” And while it’s definitely a thing, it’s often overplayed by service members. In the age of the all-volunteer force, we often seek to find ways to boost the morale of a community that is asked to carry a massive burden. And since decisive military victory did not come readily in the first decade of the 21st century, a culture of military exceptionalism grew up inside the ranks. I’ve lost track of the times I’ve been told that I’m the 1% of American society that has been blessed to wear the uniform. Or the number of times our families have been told that there is nothing more important than the military family.

Inside this culture of military exceptionalism there has grown a cancer. It is the belief that because we in the military are so special for having served, we are somehow superior to all those that have not. I call this the “douche-vet” syndrome. It can be seen in a myriad of social media posts, internet message boards, and in clothing and merchandise lines. This subculture is toxic, obnoxious, and oftentimes is directly opposed to the espoused values of the military. Needless to say, it more often than not causes a divide between the people of the United States and their military.

Looking at the root cause, there is truth to be found there. Driving home with my wife, she was lamenting that no one else in her group of friends or our community seems to understand what me being in the military actually means: the long absences, the phone calls late at night, the holidays and birthdays missed, and the occasional fear of the servicemember’s death or injury. It’s just not something that others think about. There are some who even express surprise when they hear of deployments, saying, “Oh, I didn’t think we were still active there.”

But, you’ll say, you volunteered for this. And you are 110% correct. I could leave this very moment if I wished. And I begrudge no one the hardships our family has been through. We volunteered and have been compensated along the way.

But I do have some asks of society.

Be engaged. Be involved. Know what is happening in the world. The All-Volunteer Force means that we are not often disrupting society. And as such, we can often be used all around the world with very few people paying attention. Take ownership of the fact that we are your military. We do not belong to Congress, or the President, or the Supreme Court; we belong to the people of the United States.

2 Replies to “Carte Blanche Foreign Policy: the Curse of the All-Volunteer Force”