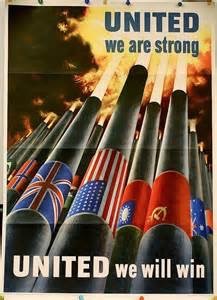 Today’s guest post comes from Barefoot Boomer. Boomer is a career Army officer and strategist. He is also a historian with an emphasis in American and German military history.  The content and opinions of this article are the author’s only and do not reflect the opinions of the United States Army or the Department of Defense.

An international coalition of over 60 nations is currently fighting the Islamic State in Iraq and Syria, and one of them doesn’t seem to realize it.  That nation is, of all nations, the United States of America.

It may come as a shock to most Americans, but on the interpersonal side of conducting warfare at the operational and strategic levels, the United States military is horrible at working within the confines of an international coalition.  This has led to significant challenges for US forces operating with other nations during military operations.  It is manifest today in our fight against ISIS and will be the cause of the coalition’s collapse and our failure if it is not fixed immediately.

The Problems with Coalitions

During the latter half of 2014, the international community came together to form a coalition to counter the spreading influence of a rising Islamic State, which by that time had engulfed large parts of Iraq and Syria.  Growing to include dozens of countries contributing both combat and support assets to the effort, the coalition has become one of the largest and most diverse in history.  But this diversity has led to more problems than successes.  The coalition may be large and diverse, but it is also extremely fragile.

Coalition cohesion is key to success of any hodgepodge of nations.  As US military Joint doctrine notes, coalitions “are by definition created for a single purpose and usually (but not always) for a finite length of time and, as such, are ad hoc arrangements.  They may not provide commanders with the same commonality of aim or degree or organizational maturity as alliances.”[i]  There are inherent strengths and advantages of nations fighting as a team instead of individually.  Countries with the same short-term goals or ends can pool their resources to achieve the results they seek.  One country may have a capability or resource that the others do not but need in order to successfully execute the campaign against their adversary.  These ideas have made coalition-building a very enticing idea in an era of limited resources and smaller militaries.

The problem the United States has with participating in coalitions has nothing to do with interoperability or forces or equipment or training.  It has nothing to do with common purpose or end states.  The issues arise at the interactive and interpersonal level, predominantly with senior leaders.  Numerous examples abound of senior US Service Members not understanding, or not seeming to care, about the cohesiveness of the coalition or the feelings and relationships with its member nations.

First, there is a deep and virulent strain of realist thought that runs through the senior leadership of the US military.  A mistrust of international organizations and a belief in the idea that the United States could, and in most cases should, go it alone when conducting operations tends to drive most of the relationships American officers and leaders have with coalition partners.  The notion that “we don’t need anyone else” or that other nations are just a hindrance to America being successful seems to be a common one around higher-level headquarters.  There is also an ignorance of the capabilities that other nations can bring to the fight, as well as the political lines that most countries have to walk in order to build the public support to provide them.

Second, American military members — at all levels, but most often at the senior leader level — tend to be very poor at international relations and diplomacy, and even worse at interpersonal relationships when it comes to the coalition.  And it shows: everything from minor jabs and jokes about coalition members to blatant, flippant attitudes when it comes to partner nation’s contributions to the effort.  There is an undercurrent of a lack of respect, mainly built on a foundation of America’s place as nominal head of any coalition as well as the deep belief in “American Exceptionalism,” and little to no understanding of coalition members’ culture or mental models.  Instances like these have soured some member nation’s attitude towards working with the Americans and could lead to an unwillingness to contribute vital resources and capabilities that the US-led coalition sorely needs.

Contrary to the seemingly boorish and ignorant actions of some American senior military leaders, the service members that partner nations have provided for the fight are, to my mind, the most professional, most industrious, most intelligent of the lot.  Partner nations fill specific slots in the headquarters and contribute niche capabilities so they can easily choose their top performers and units for the job.  And it is blatantly obvious.  The international officers and Non-Commissioned Officers perform head and shoulders above their American counterparts in staff and command positions, which highlights many of the shortcomings that the US military has in its professional development.

Can We Fix the Problem?

The model of coalition warfare is here to stay, which means that the US military must improve its ability to work with and understand its coalition partners.  Unfortunately, these problems are not easily solved, as they are deep and cultural, in both the military and the US in general, and permeate the force from the top down.  The attitudes about “foreigners” and ideas like “America first” seep into everything the coalition does, and will eventually ruin it.

We conduct multiple training exercises with allies and partners to build confidence and rapport between our forces to help us collaborate in the future. The US Army also established a program of cultural awareness and sensitivity with its Regionally Aligned Forces concept, attempting to make soldiers smart enough on regional cultures to be effective when interacting with the populace.  But that work was geared more towards the tactical level of interacting with partner armies, not necessarily at the higher planning and operations level.

The question then is how do we as a military fix this problem?  How does the US military become more coalition-friendly?  It is going to require a deep, thorough, systemic change within the military’s collective mind, and maybe even with the US as a whole.  Our individualist nature and almost brash demeanor when it comes to anything foreign (read “Freedom Fries”) must take a back seat sometimes to diplomacy and a bit of internationalism.  Understanding the value of coalitions and how we should operate inside of, or at the head of them has to start early in our professional military education if it is to be inculcated into the minds of our future leaders.  Learning more languages, understanding cultures, seeing the value in other’s participation and contributions makes any US endeavor much stronger, not weaker.  Teaching an old military new tricks is difficult, but will pay huge dividends during the next coalition fight.  As long as we ensure that the lessons are learned; it must be more than just the illusion of collaboration and not, as one UK officer told me, just “putting lipstick onto a pig.”

So, what does this mean in the overarching fight against ISIS?  It means that whichever side holds together the longest wins.  Adopting, purposefully or not, a Fabian strategy of winning by not losing straight out of the American Revolution, ISIS has to only wear down the coalition enough to bend, and ultimately break it.  Once the coalition is gone and there is no longer an international consensus against it, ISIS fighters can rest, refit, and regain the initiative.  As the coalition teeters on a relatively thin edge ISIS survives, and in some cases thrives.  The group is under the constant threat of airstrikes and strains back at the push of Kurdish, Free Syrian, and Iraqi security forces backed by coalition support.  And yet the terror group continues to attract foreign fighters, garner supplies, and survive.

Cracks have formed on both sides, yet the coalition is the far more fragile of the two organizations.  The continued marginalization of partners by the US will fray already tenuous strings.  The increased tension on partner nations from their political leadership will force the US to pressure more nations to do more that they simply cannot do.  And the divisive Americanization of the fight will ensure that partner contributions stop, members fall away, and the coalition collapses.

The content and opinions of this article are the author’s only and do not reflect the opinions of the United States Army or the Department of Defense.

Enjoy what you just read? Please share via social media or email.

4 Replies to “Why ISIS Will Outlast the Coalition Arrayed Against It, and Why It’s Our Own Damn Fault”