Today’s guest post comes from Barefoot Boomer, who is a glutton for punishment, this being his second post. Read his first post here. Boomer is a career Army officer and strategist. He is also a historian with an emphasis in American and German military history.  The content and opinions of this article are the author’s only and do not reflect the opinions of the United States Army or the Department of Defense.

On Monday, I sat in the US-led Coalition Headquarters in Kuwait and watched the Memorial Day campaign speech you gave.  Through all the bumper sticker messages, the talking points, and the rallying cries, I heard something disheartening.  You said something that I found not only untrue but also misleading for your supporters and potential voters in the November election who are still undecided. 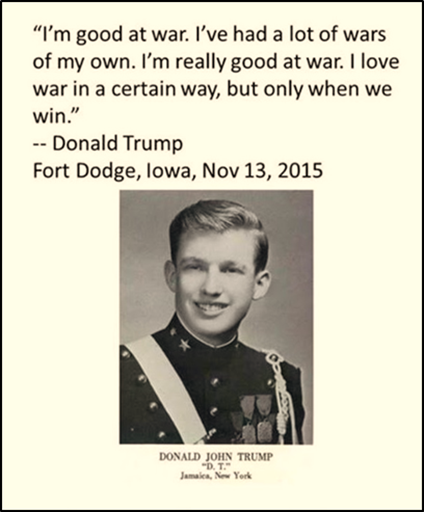 The phrase that caught my attention dealt specifically with our current fight against the Islamic State, of which I am a part.  In most speeches of yours which I have listened to, and in most soundbites that get pulled from them, there is a question about how well the fight against ISIS is going and whether or not we are winning.  You say that we are not.  I wanted to take this opportunity to help set the record straight a bit on how we are fighting this war…and how we ARE winning.

The specific line from the speech on Monday is quoted below.

My response to this claim is unequivocal.  WE aren’t beating ISIS.  The IRAQIS are.

And they should be.

This war is not like the past two Iraq wars the US has been involved in, with hundreds of thousands of troops and American forces in direct combat with the enemy.  It is not what most Americans envision when they think of us going to war, either.  They see American Soldiers killing bad guys and YUUUUUUGE battles with tanks and cruise missiles and explosions on their TV screens, like the first Gulf War.

But this is not that kind of war.

Our role is not to go in on the ground and kill ISIS fighters.  Our role is to enable the Iraqis, ALL Iraqis – Sunni and Shi’a and Kurd and Christian alike – to fight for their country against ISIS.  Our role is a supporting one that helps the Iraqis win for themselves.

While ISIS is scary and violent and have conducted terrorist attacks against us in the West, to the Iraqis ISIS is an existential threat.  The Iraqis must deal with them directly or their government will collapse and the country could descend into further chaos.  This is why Prime Minister al-Maliki asked for our help back in 2014.  When ISIS started taking more and more territory in Iraq the Iraqi government asked for more assistance, and we responded by forming a coalition of nations to help them.  And that help has come in the form of what the U.S. does best: air strikes, logistics, Special Operations Forces, training and – most importantly – moral support.  With sixty plus nations behind them, the Iraqis are taking back their country from ISIS, and they are winning.  The bottom line is this is not OUR fight.  It’s THEIRS.

And they are doing a great job at it.  The Coalition, led by the Iraqi Security Forces, has destroyed ISIS’s economic base, curtailed the flow of foreign fighters, targeted their leadership, destroyed large caches of their weapons, taken back about fifty percent of the ground they took from Iraq, and killed thousands of ISIS fighters.  ISIS is losing and the Coalition has the momentum.  The Iraqis have retaken cities and towns from northern Iraq down to Baghdad and up to Fallujah, freeing thousands of their citizens from the horror of life under ISIS.  It is because of our support, and the hard work of the Iraqi Security Forces, that we are winning.

Again, this war is different for us.  Our aims are limited and the optics are much more important than they normally would be.  The geo-political nuance of the war dictates that the narrative be different as well.  We must make sure that the fight against ISIS in Iraq is waged in specific ways.

This must be an Iraqi fight.  Even though they have asked for our help, they have not asked for U.S. ground combat forces to be used.  Our job is to give them the support they need and to enable them to take the fight to the enemy themselves.  Iraqi Security Forces have reclaimed territory from ISIS and are continuing to drive them out of the country.  We must make sure that the Iraqis take the lead and are the ones with the victories.  This cannot have a U.S. face on it.  If we want to fulfill the promise that Operation IRAQI FREEDOM was designed to give them, then we must let them earn it and finish the job.

This must be an Islamic fight.  The best way to de-legitimize ISIS and to destroy their narrative is to help our Muslim friends and allies in the region destroy them.  The rhetoric by some pundits in the U.S., including many of your supporters, has been that the fight against Islamic extremism must include Muslims.  What better example of them doing just that than the fight going on for Iraq right now?  Not only are the Iraqis fighting for their homes and loved ones but other Muslim nations are contributing to the fight as part of the Coalition.  Helping Muslims in the fight against ISIS not only shows solidarity with them against a monstrous enemy but also helps in the greater fight against Islamic extremism that we have been engaged in for the past fifteen years.

This must be a Coalition fight.  The Coalition that the U.S. has helped build to fight ISIS has grown to more than sixty nations now, to include the Iraqis.  Each nation brings with them specific capabilities and forces that can assist the Iraqis in pushing ISIS back and regain their sovereignty.  This cannot be just an American fight.  The Coalition of dozens of nations must stand together against ISIS and its evil.  We have been training, advising, and supporting the Iraqi Security Forces in their drive to rid their country of ISIS, and any negating of our Allies and Partners that you and your supporters have done, along with the “losing” rhetoric, is hurting us and our mission.

It’s understandable why you would say such a thing; the political calculus, the anti-Democrat rhetoric, the attempt to seem as pro-military as possible, these all play into the position your supporters hold about the war we are waging.  This is a contentious Presidential race and it’s not the first time a candidate has used a conflict for their political gain.  All candidates triangulate and say things on the campaign trail to win the most votes.  But your fundamental misunderstanding of how we are fighting this war and why, purposeful or otherwise, is giving your supporters the false idea that this is really our fight, and that we are losing it.

You think your rhetoric is helping, but it’s not.

You think “winning” is thousands of U.S. troops on the ground storming Raqqa or Mosul, but it’s not.

You think feeding the fear and anxiety that people have about terrorism and ISIS and Islam in order to win your party’s nomination will help us in the long run but it is doing the exact opposite.  Telling your supporters that we are losing, that our military is weak, and that it takes American military might to “win” sends the wrong message to not only the American people, but the Iraqi people and the world as well.

Mr. Trump, if you truly want to help us defeat ISIS then change your tone to one more supportive of the mission we are undertaking on behalf of not only the American people, but the Iraqi people as well.  Maybe come to Iraq and Kuwait and see the good work that the Coalition is doing in support of the government to rid ISIS of its’ safe haven and restore Iraq’s sovereignty.  If you really love the American military and want us to be strong and want us to win as you say you do, then I ask that you please change your message.  Help us by supporting our mission in helping the Iraqis as they fight and die for their country.  And for us.  I’m sure General Patton and all the rest would approve.

The content and opinions of this article are the author’s only and do not reflect the opinions of the United States Army or the Department of Defense.

Enjoy what you just read? Please share via social media or email.