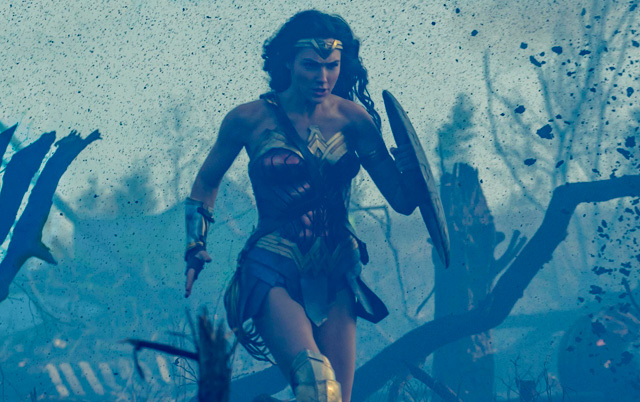 Wonder Woman struck the big screen in a blaze of action and glory last week, depicting the heights to which people will go for each other – and the lows of which humanity is capable. The settings for the film could not have been more different – a paradise island where the Amazons rule in peace, and the world of 1918, wracked and gutted by the First World War. The movie manages to encapsulate much of the American experience of World War I – and why we don’t remember much about it anymore.

As wars go, World War I doesn’t get a lot of coverage with American audiences. We are generally aware that we did something, perhaps very little or perhaps we saved the world; depends on who you talk to. We know that the British and Germans fought each other, in trenches, and that it was generally fairly dreadful. If asked what the war was about, or why we entered it, the answer is generally a shrug. And yet, World War I changed the entire fabric of our world – politically, culturally, geographically, and economically. That the war ended in a negotiated Armistice without settling any of the scores certainly didn’t help – it served to lead up to round two of the world wars.

The character of Diana – played magnificently by Gal Gadot – enters the world of men after American pilot Steve Trevor (Chris Pine) crash lands on her island. Diana, although brought up for war, is shocked by the Great War. For her, warfare is noble, it is fought to bring about peace, non-combatants are spared, and fighting takes place on a personal level. Thus, the inhumanity of World War I shakes her to her very core, half-goddess that she is.

Diana is not unlike the United States of 1917. Young, idealistic, semi-naive, the U.S. finally took up the rifle on April 6, 1917 to “make the world safe for democracy,” as President Woodrow Wilson said. And that was no mere political catchphrase; by and large, the millions of young American men who went off to war believed that they were fighting for something larger than themselves – for a higher cause. These young, vibrant Americans – especially the volunteers who went into combat early in 1918 – pitched joyfully into battle, sometimes described by their shocked French allies as “singing while they used the bayonet.”

When Diana arrives on the Western Front in the British trenches in Belgium, she confronts the great stalemate of the war: a line of fortifications running from the North Sea to the Alps. Steve Trevor tells her that it is useless to go into No-Man’s Land, that no one can survive out there. But Diana hears that there are women and children in danger, so she scorns the men’s warnings and takes off out into the deadly space between the lines. Sure enough, a German machine gun – a Maschinengewehr 08 – opens up, minenwerfer mortar rounds arc towards her, and the young and idealistic heroine is caught in a maelstrom of fire. Using her shield, Diana deflects the incoming fire, holds her ground, and finally leaps into the trenches – destroying the machine gun with the edge of her shield. Where men cannot survive, she can. Emboldened, the British battalion in the opposite trenches storm through and take the German front-line trench.

Diana was half-goddess, so that definitely helped her survive the deadly charge. But remember the yanks I described earlier, singing while they went into battle with bayonets fixed? American command was not fond of trench warfare, and instructed its soldiers in open warfare – that is, movement and maneuver outside the trenches. By that point in the war, the French, Germans, and British had almost all figured out – through millions of losses – that open warfare merely resulted in high body counts. Thus they were dismayed when they saw the Americans charge into battle in 1918 using the same tactics they had used in 1916. Echoing Steve Trevor, they told the U.S. Soldiers and Marines that it was useless to advance in the face of such heavy fire. Yet, advance they did. Far more Americans died in the less than a year of combat than needed to; it wasn’t until the end of the war that the U.S. finally began to pick up on the operational art of war.

But what the Americans brought was numbers, spirit, and a renewed desire to see this thing through to the end. Like Diana, they crossed No-Man’s Land – many falling in the process – and shoved the German line backwards. With her, they hated the German machine guns and made it a point to capture them and their gunners. They fought for a people whom they did not know, crossing an ocean to fight for an abstract principle.

Wonder Woman is a fairly realistic film, at least as it relates to human nature, so of course this idealism does not last. Diana confronts her perceived antagonist, German General Erich Ludendorff and kills him, expecting that it will end the war. It does not, and Diana is forced to come to terms with the broken and flawed nature of humanity and free will. She briefly turns away from humanity, before finally coming back to its rescue because of the self-sacrificial act of Steve Trevor. So too were the American combatants of the First World War forced to come to terms with their conflict. The blood and brutality of battles such as Château-Thierry, Champagne-Marne, St. Mihiel, and the Meuse-Argonne – America’s single most costly battle, ever – sapped the vitality and optimism out of the combatants.

Worse still was what followed the war’s end. After all the blood and sacrifice, the Armistice solved nothing. Democracies failed around the world. America slid into Depression, Europe revolved back into conflict, and it all seemed to have been for nothing. It was as if Ares – the Greek god of war, who Diana eventually fights to conclude the movie – had won.

And yet, World War I presented Americans with an honest picture of reality. The world was a brutal place. America stepped onto the world stage, put over two million men in uniform on the continent of Europe, helped drive the Germans to the negotiating table, and suddenly found themselves a major player on that stage. We had finally made it. But now that we were there, we didn’t really like what we saw. So we stepped back. We returned to isolationist-like policies and left Europe to itself, only to have to go back again two decades later.

And this is where our similarity with Diana ends, because rather than shy from the brutal messiness of the world, she realizes that the world needs her and that there is much worth fighting for. And so she stays, to continue to fight for justice and that which is good. She is the heroine that the Great War deserves, but never really got.

For our part, between the Great Depression and World War II, the War to End All Wars slipped into oblivion. There were no neatly tied ends to the story; no clear good guys and bad guys. And so we decided that we didn’t want to think about it. In not thinking about World War I, we have committed some grievous military and foreign policy errors since then.

Beyond the allegory of a young America in World War I, Wonder Woman contains some interesting nuggets of World War I history, some good and some less so. For example, the film focuses a lot on the British experience of World War I. And while Britain did play a major role in the war, it pales in comparison to the French. Being that we are an English speaking society, and that our cultural heritage comes mainly from England, the United States generally seems to forget that France  was the most significant combatant of the Great War for the Allied side. It is made all the more frustrating when one realizes that the French have not forgotten our contributions. While it was disappointing not to see French or American soldiers in Wonder Woman, the film did capture the cosmopolitan makeup of the British Commonwealth at the time, with appearances of Canadian, Indian, and Australian soldiers.

We are also given a glimpse into the backstory of Steve Trevor, where a photo of him leaning against a biplane with the iconic “hat in the ring” markings reveals that he had been a member of the 94th Aero Squadron, one of the most successful U.S. flying outfits in World War I. The squadron boasted eight aces – pilots who had shot down five or more aircraft – including Eddie Rickenbacker, whose 26 kills earned him the Medal of Honor. The photo also shows Trevor wearing a small metal cross, which appears to be the French Croix de Guerre (Cross of War), an honor presented for valor in combat.

There is one other hidden easter egg of the Great War in this film: the character of Erich Ludendorff. While many viewers might just assume that he was created as a villain for the movie, Ludendorff was in fact a very real and very senior officer of the German army. And while he did not maniacally kill his fellow generals and try to scrap the Armistice, Ludendorff did his damnedest to pull out a win in the last year of the war. In the spring of 1918, Ludendorff launched Operation Michael – a series of offensives that were aimed to knock the Allies out of the war before the Americans could arrive in force. And it almost worked. In the film, Ludendorff’s reign of terror is ended when Diana pins him to the roof of a guard tower with her sword. In reality, Ludendorff’s undoing was the American 2nd and 3rd Divisions, which blocked his way to Paris in 1918. Indeed, the U.S. Army’s 3rd Division’s nickname is still “Rock of the Marne.” The German juggernaut was stopped, and then set back on its heels by attacks from the U.S. Marine Brigade at Belleau Wood, and then from the offensives of the 26th “Yankee” Division, the 42nd “Rainbow Division,” the 1st Division, and the 28th Division. Americans poured into the Aisne-Marne region to deliver pummeling blow after blow against Ludendorff, ending the final German offensive of the war.

After the war, Ludendorff continued to be active, but this time in politics. He espoused the “stabbed in the back” theory, that the military could have still won the war but that the politicians gave up. An ardent nationalist, he believed that he and his comrades had been undermined by communists and Jews. It should then come as no surprise that Ludendorff teamed up with Adolf Hitler in the failed “Beer Hall Putsch,” an attempt to overthrow the German government. Needless to say, he wasn’t a very nice fellow. Therefore, the schadenfreude of watching Ludendorff get turned into a pincushion by Diana, played by the granddaughter of Holocaust survivors – and who was in the Israeli Defense Forces herself –  is just absolutely delicious.

The best part? This is how Ludendorff will be remembered now in popular culture. Forever.  Which is only fitting.

About the Author: Angry Staff Officer is an Army officer who is adrift in a sea of doctrine and staff operations and uses writing as a means to retain his sanity. He also collaborates on a podcast with Adin Dobkin entitled War Stories, which examines key moments in the history of warfare.

3 Replies to “Wonder Woman & the Great War: How WWI gets the Heroine it’s Always Needed”