Today’s guest post comes from Eamon Hamilton (@eamonhamilton), who,  like a modern day Bruce Wayne, has two lives. By day, he does Public Affairs with the Royal Australian Air Force. By night, he stands with those who over-analyse the Star Wars films. He can be found writing here.
Mom,
I suppose it’s too early to hope that Dad’s forgiven me for leaving you all (and my studies) behind, but I write this letter so that you may hear that I am in good health, and made it safely to the Rebellion.
I still don’t regret walking away from university, and I know what the family thinks of the faculty for talking me into it (especially Professor Tyree). But, after that student protest against the destruction of Alderaan, I knew in my heart that I didn’t have a choice. I was set on taking a stand against the tyranny of the Empire.
Still, there’s a couple of things that I’ve seen since I joined the Rebellion that have really, really opened my eyes.
Our whole operation is so god damned loose. There was very little formal induction when I arrived, and almost no basic training. A guy literally gave me my uniform and rank patch, and assigned me a job he thought I’d be good at. When I asked them about an Officer Training program, they told me their Academy had been vaporised by Walkers a month ago.

I was expecting to learn how to handle a blaster, but because we’re on a starship, we have no firing range – I have to learn how to use a DH17 blaster entirely on my datapad.  (Image courtesy Lucasfilm Ltd)
Whilst my studies at University are incomplete, my skillsets have never-the-less been a welcomed by the Rebellion. On my first day here I was asked about my skillsets, and I told them that I was a second-year Business Undergrad with a minor in Corellian Lit. Now, I am responsible for supply management and warehouse stocktake for the Rebellion in the entire Outer Rim. No joke. It’s my job to ensure 2.5 million Rebel soldiers, techs and crew are being adequately fed, clothed, and equipped to fight the Empire – it is a war unto itself. I should count myself lucky though. Other guys who arrived here with me had less than 200 hours of T-16 Skyhopper experience, and flew Starfighters on combat sorties the next day.
That level of trust from the Rebels might make the family proud – hell, I think even Dad could manage a smile. But the reality is a nightmare. There’s bases in systems I’ve never even heard of. Ensuring timely and accurate supply of stores to the Rebellion is a job that could be best done by a machine, because before me, it was. A Protocol Droid was responsible for managing all of this before I arrived, but High Command felt too many people were knocking it out of the way so that they could just take what they needed from the stores. Now I manage all of the stock requests too, so that High Command has a sentient being in the chain. When I tell Rebels they can’t have something, I’ll get called an obstructionist – or worse, told I’m “helping the Empire”. If they’re not human, they’ll tell me I’m a racist to boot. Astromechs will usually trundle out of my office making a sad wail. All the while, the Protocol Droid whose job I took is still here, standing in the corner and quoting supply regulations at me all day.

He will not shut up about how he used to run things on Yavin IV.  (Courtesy Lucasfilm Ltd)
Most of the issues I have are just on this starship alone. We have 42 sapient species serving onboard, which means we have 42 individual dietary needs, uniform styles, and living requirements. The warehouse on board was built to serve just Mon Calamari. High Command just assumes it’s OK that our stores will suit everyone’s needs equally, but they’re hopelessly wrong. Bothans are allergic to synthetic fabric. Sullustans stretch the neck holes on all tunics we give them. When my Droid suggests a Twi’lek use the same bunk lining as a Devaronian because they’re both from similar planets, I get called in to mediate another diversity counselling session between the aggrieved parties.
We raid Imperial convoys from time to time, but the stock we steal from them is optimised for for humans. Our own supplies are almost always next to useless. One of the GR75 transports made it to us from Hoth carrying 60 tonnes of Mon Calamari food stores that had been in cold storage. Pretty much all of Rogue Squadron is allergic to shellfish, and Commander Antilles is on my case to provide him with field rations (I told him to use the emergency supply in his X-Wing – he wasn’t happy).
These are just an illustration of the struggles I face on a daily basis. I usually get my first one at 0300hrs, when someone wakes me to say an attack is being launched by Gold Squadron (always, always Gold Squadron) in just a few hours. They’ll have been planning this op for weeks, but only thought to requisition proton torpedoes the night before. Despite all the requisition briefs I give them and High Command instructions that get handed down (I usually get General Rieekan to lay the guilt trip on them – he’s perfected the ‘I’m-very-disappointed-in-you’ delivery to Gold Squadron CO), you can’t change them. I don’t get much more sleep before breakfast. 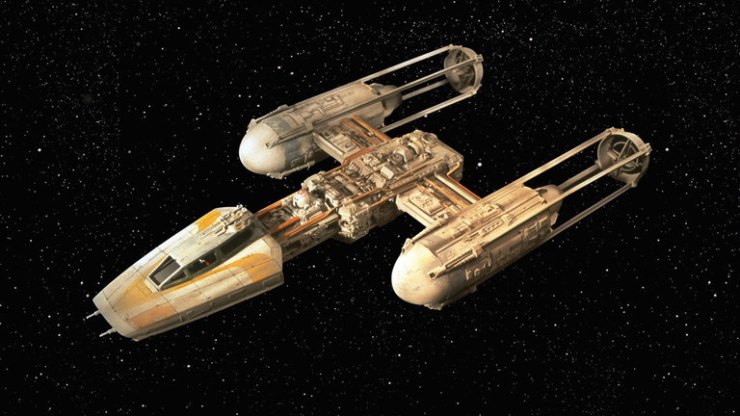 Every time High Command wants to remove funding for Gold Squadron’s Y-Wings, General Salm leads another insurrection against them and keeps it in service for another two years, which means I’ve got to find spare parts for it. I hate these ships now with a passion. (Courtesy Lucasfilm Ltd)
After breakfast, I’ll head into our morning brief at 0800hrs. Thanks to me, our ship’s briefing room now has a holographic projector, and sometimes we’ll get briefed in on a major raid or counter-attack against the Empire, so I get a good feeling about the work we’re doing. Not everyone knows how to effectively brief with the holoprojector though, and most of our presentations aren’t about attacking the Empire. Our starship’s administration officer subjected us to a three-hour presentation (no breaks) this morning on ‘how to effectively assess risk within the workplace’. Each holoprojection was just another page of text that he read aloud. I was about ready to jump into the airlock by then end of it.
After the brief, I’ll head into a Command meeting latter that morning to discuss stores and equipment. If we’re running low, they’ll almost always say “we should raid another convoy” (which is usually the root of our supply problems in the first place. There’s no guarantee they’ll give us what we need. One time we captured an entire container ship of Darth Vader’s gloves – who knew that he went through so many). I’ll put forward my list of recommendations and suggestions, and if I’m ambitious, will ask if we can capture a planet with a good manufacturing industry. I’m almost always ignored, depending on who is listening.

On an unrelated note – guess what I’m getting everybody for Life Day this year! (Courtesy Lucasfilm Ltd)
All of High Command has their own unique experience and agenda, which either helps or hinders. General Dodonna’s been around since the Republic, so he’s old and will often say some pretty inappropriate things. Admiral Ackbar is a good fleet operator who gets logistics, but he will not stop telling stories about when he was Aide de Camp to Grand Moff Tarkin 20 years ago. Seriously, guy, get over it. General Madine meanwhile just defected to us from the Empire, and you can’t half tell he’s used to getting what he wants – yesterday he requested an entire squadron of Lambda Shuttles for a training exercise that he wanted to run on Chandrila. I think I’ve seen one Lambda the entire time I’ve been here, and it’s been reserved exclusively for  Mon Mothma.
At least General Madine held a rank (although I heard someone say that he was only an acting Colonel when he left the Empire). General Calrissian is another matter. You might remember him as that guy who became Mayor of Bespin after he won a card game. That’s good facility administrative experience I guess (we all kind of hoped he’d be sent to be the new Commandant of our Staff College, but you guessed it – vapourised by Walkers). But the guy has no formal record of military service, which means he has less of an idea about our business than I did when I arrived. Worse yet, he outranks everyone significantly. General Calrissian asked me in his first week where he could get a massage on our ship. He constantly complains about us speaking in acronyms (we do, but it’s his fault for not understanding them). He’ll then use a bunch of smuggler’s slang that nobody has heard of, then brag about how he pulled a little manuever in the ‘Battle of Tanaab’. I searched Tanaab on my datapad – the page had been removed by the ship’s content manager. I’ll make some enquiries later.

When he arrived, he added a non-issued cape to his uniform. Now everyone on the god damned ship is telling me they need a cape. (Courtesy Lucasfilm Ltd)
If I’m lucky, there might be time for PT in the afternoon, though that time usually gets co-opted by a last minute panicked request from someone like General Rieekan to do a stocktake of all explosive ordnance on the ship (which, by the Empire’s own regulations, we’re in dangerous violation of – but our safety margin is significantly lower, so somehow we’re OK). I’m not too fussed about missing out on the gym, because Major Derlin’s Commandos have usually taken all of the equipment.
Dinner is from 1800hrs, but for the last three days running, I’ve been held back in the hangars because a smuggling ship has left with goods/payment more valuable than what they delivered. 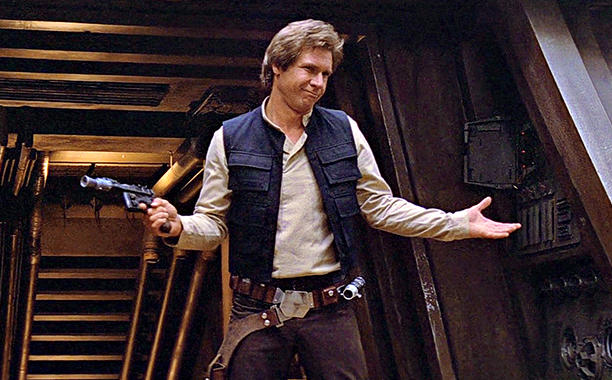 Unless it’s this freeloading jerk, who will just. Not. Go. Away. (Courtesy Lucasfilm Ltd)
There’s more I could say, but I feel like I’ve shared enough of my experiences for one transmission. I’m needed in a warehouse meeting with General Reekan to decide what we’re going to do with 50,000 snow uniforms, especially seeing as High Command decreed after Hoth that “the Rebel Alliance will no longer operate major operating bases on ice planets”. My suggestion that we just space the entire stock and leave it floating until we need it again was not well received.
Give my best to the family, my love to Karoleen, and I hope to hear from you soon.
-Your Son