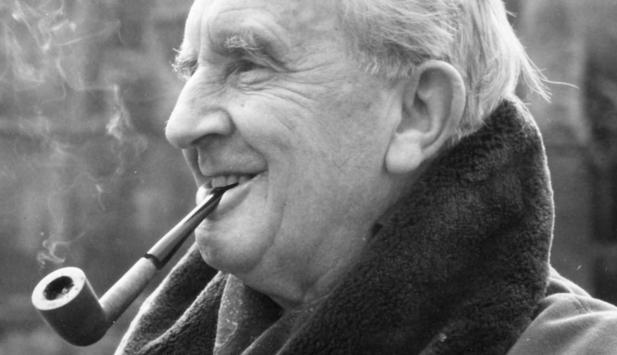 I’ve been mulling over this idea of going back and revisiting old favorites, both in literature and film. If you’re like me, you read a lot of books growing up and probably had your favorites that you revisited time and again. Same with movies, TV shows, and documentaries. As we’ve gotten older – and our available time has diminished – we find ourselves less able to go back to read or watch our old favorites. This is a shame, because as we grow older and garner more life experience new levels of meaning rise to the surface. A prime example is J.R.R. Tolkien’s The Lord of the Rings saga. As a teenager I read and re-read these books until the covers fell off, fascinated with the world and adventure it created. It was not until I returned from a deployment to Afghanistan that I found a deeper meaning in Tolkien’s writing, one that had a personal connection to me as a veteran: the difficult transition from soldier to civilian.

Tolkien knew this transition very well, as a citizen-soldier veteran himself. After graduating from Oxford in 1915, Tolkien joined the ranks of Britain’s volunteer army in World War I. As a civilian, he chafed at the rigid discipline and class structure of the British army that kept him from developing a personal connection with the men under his command. After the war he wrote, “The most improper job of any man… is bossing other men. Not one in a million is fit for it, and least of all those who seek the opportunity.” He arrived on the front as a signal officer one week after the horrific Battle of the Somme, where 20,000 British soldiers were killed in action. On the first day alone. His time on the front impacted him deeply, as did the loss of so many of his friends. Indeed, in his forward to The Lord of the Rings, he writes, “One has indeed personally to come under the shadow of war to feel fully its oppression; but as the years go by it seems now often forgotten that to be caught in youth by 1914 was no less hideous an experience than to be involved in 1939 and the following years. By 1918, all but one of my close friends were dead.” Tolkien came off the front lines in late 1916 because of illness, but the war stayed with him for the rest of his life. For more on how the Great War impacted his writing, read this excellent post.

One of my favorite part of the series was the portion in The Return of the King, entitled “The Scouring of the Shire.” It was regrettably left out of the movie adaptation, one of many flaws for which I hold Peter Jackson accountable – but that’s another rant altogether. “The Scouring of the Shire” tells the story of the hobbits’ homecoming to a home that is drastically changed. It is the story of combat veterans returning to a world that they are completely unfamiliar with. As the hobbits ride in, still wearing their raiment of war – helmets, armor, swords – they are greeted by friends and family who stare at them in amazement, unsure how to deal with the transition of their formerly fun-loving friends to hardened warriors. Frodo, Sam, Merry, and Pippin are taken aback, not having seen themselves as having changed, being fully used to travelling armed, in groups. Veterans of Iraq and Afghanistan can immediately see the comparison to the first time they got into a civilian car when they returned home. It seemed odd to not be travelling in an armed convoy, always hyper-aware of enemy threats, or not having your weapon at arm’s reach.

The protagonists struggle with how to deal with this transition in different ways. Sam, Merry, and Pippin, being younger and more resilient, channel their energy into transforming their community and using their new skills to rid it of the evil influences it has fallen under. They start families and become leaders in their community. This is true of the vast majority of our veterans. But for Frodo, the pain and trauma of the “War of the Ring” is not easily thrown off.

Frodo is shaken by what he has seen and experienced, and displays very obvious symptoms of post-traumatic stress. On every anniversary of his wounding he is haunted by grief and pain. For many of our combat veterans, anniversaries of battles or losses of friends can be traumatic times. Frodo is unable to emerge from a larger depression on the war and all the loss it has caused. His comrade in arms, Sam, tries to get him out of his depression. Frodo responds, “I have been too deeply hurt, Sam. I tried to save the Shire, and it has been saved, but not for me. It must often be so, Sam, when things are in danger: someone has to give them up, lose them so that others may keep them.” This is the true cost of war, the cost that so many have paid in fighting for our country.

In the end, Frodo cannot live with his pain any longer and leaves Middle Earth to go with the elves over the sea where he can live in peace. This always struck me as somewhat sorrowful, but yet still happy, as he found joy somewhere else. In reality, it is far, far more tragic than that. For veterans, there is no similar escape. Many choose the final escape from their pain through suicide. In essence, this is what Frodo does as well. This work of fiction underlines the importance of helping veterans connect with the world again, to help them find joy and fulfillment that can outweigh the pain and depression they carry. We cannot let suicide be the answer.

For Tolkien, war was never very far from his mind. His good friend C.S. Lewis had been wounded in the Somme during the war, and the two shared the bonds of combat veterans. Tolkien’s son, Christopher, served in the Royal Air Force during World War II, surely causing his father great fears for his safety. Tolkien treated the peculiar mixture of boredom and fear that war brought by writing while he was in the trenches. Perhaps his great work after the war was part of his way of dealing with his own trauma and “survivor’s guilt” – most of his battalion was wiped out in the weeks after he came off the lines. If so, then it is a sign of how cathartic writing can be, and how valuable it is for veterans to be able to use it as a release. In writing, we can escape, we can create our own worlds, futures, and outcomes. It offers something that we can control, when often so much of life seems completely out of control. For those struggling with the transition from war to peace, or with their own inner demons,  writing offers untold solace.

10 Replies to “Tolkien and Combat Stress: Writing as a Release”