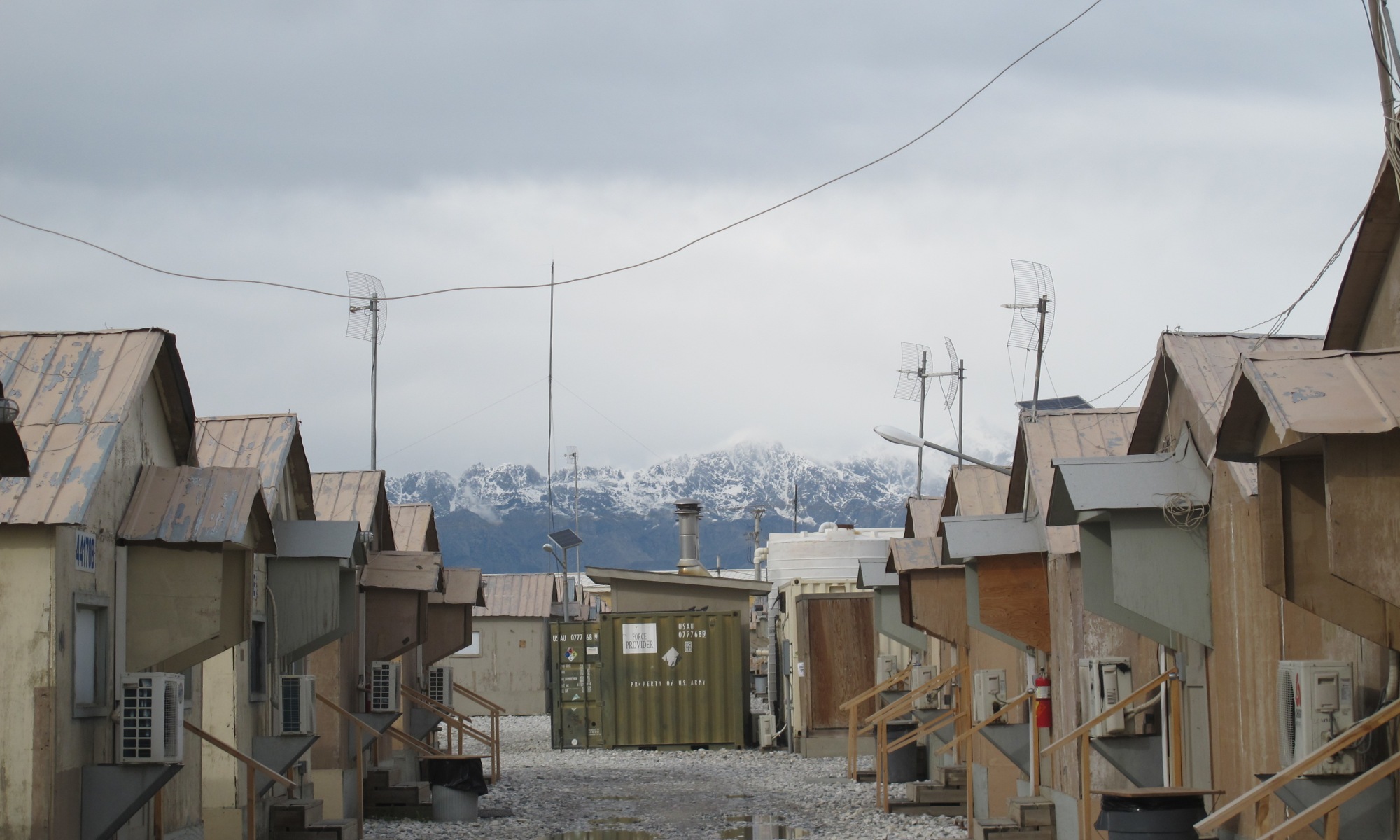 When I walked off the ramp of the C-17 and the dusty heat of Bagram Airfield slapped me in the face, I went through the same thought process as thousands of U.S. servicemembers before me: what the hell am I even doing here?

It was the fall of 2013, and I was arriving in Afghanistan to participate in the responsible closure and transfer of U.S. bases to the Government of the Islamic Republic of Afghanistan.

Or, in more common parlance, I was there to remove the detritus of twelve years of war.

Which is why I grew more and more confused as our Toyota Hilux rolled through the maze of streets, shacks, B-huts, T-walls, electric wires, and bunkers that made up Bagram Airfield: I thought we were leaving? Why is there so much new construction?

As we completed our relief of the unit we were replacing, it became rapidly clear that although everyone at the top of the food chain had made retrograde a priority, that had not trickled down to the lower levels. Base and camp commanders fought tooth and nail to keep their little fiefdoms.

And construction projects that had been contracted years ago still went into motion, even as the President confirmed an end to the U.S. combat mission by the end of 2014.

Our battalion headquarters set up in tents on the edge of the base, adjacent to a massive construction site where hardstand barracks were being built, complete with electricity and running water. U.S.and Coalition personnel had been on Bagram since 2002, but only now they were building hardstand structures that were strong enough to withstand 107mm rocket blasts? That one flummoxed me.

The project was months behind schedule and the base was becoming crowded to overcapacity as troops pulled off forward posts and consolidated on Bagram, there to serve out the duration of their tours; often as little more than tourists. Why not just send them home? I often thought.

I didn’t have too much time for that thought, as I was too busy fighting a new kind of war: a war against contractors.

You see, the U.S. military does not have the time or manpower to fully maintain all of its overseas bases; what is does – or did – have, is a lot of money. And that money was being liberally spent on contractors who maintained base housing, electricity, plumbing, water, laundry, internet, and food. Contracts were written based on a certain population that the contractor would be supporting. Which is why “retrograde” became a dirty word to them.

Here’s how the process would work: United States Forces – Afghanistan kept a timeline of what bases needed to be closed, what bases were to be transferred, and what bases were to be right-sized to support a smaller population of troops. They would send those orders to the division level, as well as notifying (sometimes) base commanders. Division would pass this on to brigade, who would then send us our orders, which usually consisted of tearing down whole swathes of temporary structures.

At that point, I’d head on over to whichever U.S. base or part of Bagram that we were going to be leveling and do a quick recon. When I first started, I was continually surprised at how nine times out of ten the housing was still occupied by tenants and the life support structures were still up and running. As time went on, and I learned how contracts operate, I stopped being surprised. Even if provided with the orders and timelines of when camps would be coming down, even if their tenants had all moved out, contractors were numbingly slow in cutting the power and removing all their property from the living areas.

This was endemic everywhere we went in Afghanistan: Logar, Ghazni, Mazar-e-Sharif, Jalalabad, Kandahar. In the way of any block of buildings to be torn down, incinerators boxed up, or office areas to be bulldozed stood a contractor.

When I went to oversee the paperwork for getting rid of an incinerator, I met a grizzled gent who had been there for a few years. Prior to that, he was at Camp Anaconda in Iraq. In fact, he’d been there since just after the invasion. Which meant that he’d basically been a contractor since the beginning of the wars on terror.

As a good ‘Merican capitalist, I can’t frown on people like that. However, I did get pissed off at the contractors that would take advantage of unwitting service members by getting them to sign their letter of agreement (LOA), thereby continuing their contracts. The military police on Bagram spent half their time checking LOA’s, trying to catch the people whose contracts had ended but were in essence squatting in buildings and installations.

The worst, however, was the company that tried to rope us into experimenting with their “new” technology for Soldier and vehicle protection. One of their representatives approached one of our less-than bright NCO’s, talking up all this new protective gear and asking him to see if our unit would try it out. After a lecture on how DoD acquisitions works, the NCO broke off contact with the contractor. But for a company to have the gall to risk Soldiers’ lives just to get a contract left me furious.

Is this a rant that all contractors are evil and that the Army needs to get away from the process? Not entirely. I met many who were good people and just trying to make the right decisions for themselves and their families. Contractors risk their lives to provide services to troops that make our lives incredibly more comfortable. In fact, two contractors were killed in a rocket attack while we were at Bagram.

However – and there is always a however with me, you know that – I encountered too much about the system that left me feeling disgusted. It was too ripe for corruption, bad business dealings, and for mismanagement. Obviously, much of the blame has to be laid at the door of the U.S. military, for not practicing adequate oversight of where taxpayer dollars are spent. The entire system needed to be reformed and reevaluated, I thought at the time.

Which is why when I read that because of reduced troop levels in Afghanistan, aircraft maintainers are being replaced by contractors, I grimace.

Clearly we aren’t learning anything.

Enjoy what you just read? Please share via email or social media.

One Reply to “Is DoD Contracting Out of Control?”