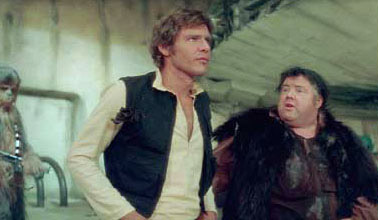 Finally, the influence of the Angry Staff Officer Blog within the Star Wars community has been acknowledged – an anonymous source from Lucasfilm has sent this exclusive breakdown of some of the new characters we’ll see in future Star Wars films.

We wont say how many Bothan Spies died to bring us this information, suffice to say it confirms long-held suspicions that the Lucasfilm story group is drawing on real-life inspiration for its new characters and story ideas. Anybody within the NatSec community would have felt an eery sense of recognition when they saw the likes of Kylo Ren, General Hux, and Director Krennic on the big screen, whether it be their personality or political motivations that rang all too familiar.

It would appear this trend will continue, as the Star Wars franchise continues to draw on some other contemporary examples….

Zander Johas  – Male, 40 to 55, husky figure. Must be willing to wear facial prosthetic.

For the first time, the Star Wars Galaxy will tackle how the way the media shapes and affects the Galactic Civil War, with the Jon Favreau-led Star Wars television series introducing us to a new band of outlaws led by the sinister Zander Johas.

Rather than deal with the Galactic Media writ large however, the new series will pit our heroes against a community of independent holonet figures (led by Johas). Their wild conspiracy theories about the Rebels and Old Republic have drawn a fierce and determined group of followers throughout the Galaxy, threatening the balance of power against the Rebel Alliance.

Johas is convinced the Confederacy of Independent Systems and Count Dooku were a nefarious plot conceived by none other Mon Mothma, who was seeking to undermine peace in the galaxy; that the destruction of Alderaan and Jeddha were actually false flag operations orchestrated by a rogue Imperial Senate; and that Princess Leia, Senator of Alderaan, was in fact a crisis actor employed by the Mothma Crime Syndicate. Did you know she wasn’t even born on Alderaan!

Each new episode brings a fresh insight of Johas’ twisted view of life in the Empire, especially on the topic of blaster control. Johas broadcasts security footage from a bar on Tatooine, showing an Imperial veteran (who also happens to be an independent businessman) being threatened by an alien criminal with a blaster. The veteran killed the alien in self-defence – but footage of the encounter has been doctored to make you believe he shot first!

The depths of Johas’ delusions become apparent when he argues that his unconventional values actually makes him the Rebels, and the totalitarian freedoms demanded by the Rebel Alliance makes them the tyrannical Empire. These mad ramblings are endorsed by Emperor Palpatine, who appears on Johas’ holonet program to tell him “he’s doing a heck of a job”.

The first season finale features a band of Rebels mounting a daring raid against a refinery that produces a popular spice supplement that Johas endorses on his program.

There’s no such thing as a small character in Star Wars – even those extras in the background are elevated to greatness, with their own action figure and extensive backstory. A previously unannounced X-Wing: Rogue Squadron feature film will explore these characters more deeply, and introduce us to the droid 1-UPR.

Much like C-3PO and R2-D2 have been ever-present throughout the Star Wars saga, 1-UPR too has been a witness to history – only his story is way better than those droids combined. R2-D2 might have delivered the Death Star plans to Yavin VI, but 1-UPR delivered them a full month earlier – except he didn’t arrive in a hotrod (and totally illegal) freighter with a Princess Senator and Jedi trainee, so he totally got ignored.

Throughout X-Wing: Rogue Squadron, we learn more about 1-UPR’s experiences as he regales Wedge Antilles and the team with his stories. For example, during the Battle of Hoth, it was 1-UPR who actually figured out how to defeat the AT-ATs using tow cables and thermal detonators first – and he had more tactics to defeat them, too, but they were deliberately ignored by General Rieekan just because of a disagreement they had in the Command Centre which may have ended with 1-UPR being given a formal warning (which, by the way, was technically never put on the record because of the evacuation, so it doesn’t count, and he’ll charge you if you say otherwise). Just think! Rebel lives could have been saved!

Amazingly, all of 1-UPR’s accomplishments don’t seem to have translated into actual career success or progression, although some of the Rogues question whether evidence of these claims even exists. Perhaps the biggest revelation comes as 1-UPR claims his superior programming conceived a winning strategy for the Imperial defeat at Endor. What’s even more incredible is that 1-UPR somehow conceived the strategy months in advance, before he or the Rebel Alliance even knew about the battlestation or its defences. But – yep, you guessed it – he got ignored because the ‘High Command’ couldn’t deal with a droid crafting an Empire-defeating strategy.

The script for X-Wing: Rogue Squadron calls for 1-UPR to be used in a number of scenes that will ultimately be cut from the film because no director can figure out how to make the character work.

Many millions of beings served during the Clone Wars and Galactic Civil War, but seldom does the franchise deal with the stories of those who have left the service. The creative team of DB Weiss and David Benioff will give us a fresh insight to life under the Empire at the height of its reign, introducing us to a range of characters that will include former Death Trooper Barrad Clegg.

Discharging from service shortly after the Battle of Scarif, Clegg remains a Death Trooper through-and-through – and won’t hesitate to remind anyone! From the ‘IF YOU CAN READ THIS IN AURABESH, THANK A DEATH TROOPER’ sticker on his airspeeder, to the Death Troopr boots and pauldron that he continues to wear in his new civilian life, it appears that Clegg carries his passion on his sleeve – literally. His arm sports an impressive Bantha Skull tattoo, a favoured symbol of the warrior class and an elite few of the Death Trooper community.

We meet Clegg as his star is on the rise, working as a consultant, correspondent, and guest on behalf of Imperial Veterans across the Galaxy. His memoir – ‘Squawk Zero Bravo – Stories, Musings, and Words Only a True Death Trooper Would Understand’ – was a hit bestseller, but Clegg is now applying the specialist training and skillsets he gained as a Death Trooper in other self-help guides, covering a range of topics including Cloud City Administration, Parenting, and even Pod Racing.

Clegg’s beliefs however court controversy during the series. He is adamant that only full helmet-wearing troopers should be considered ‘True Veterans’ like himself; that TIE pilots wearing black helmets are “a disgrace to my service”; and that Clonetrooper are physically incapable of suffering PTSD; in fact, he knows ‘high ranking officers’ who told him that “it was totally engineered out of them in the cloning tanks”.

At the climax of the first film, it is revealed Clegg may have never actually served on Scarif, with rumours surfacing that Clegg was not a Death Trooper, but rather one of their armourers.

The stunning conclusion to Star Wars Episode VIII: The Last Jedi left the Resistance a shadow of its former self, but a Galaxy united around the legend of Luke Skywalker. Star Wars Episode IX, working under the production name Blue Audit, will deal with how the Resistance must lead what remains of the New Republic – and introduce to the new character of Lieutenant Cora Dantels.

At first glance, there doesn’t appear to be anything remarkable about Dantels. She graduated Corellia State University with a Commerce Degree (and a minor in Ithorian studies), did an internship with Koensayr Manufacturing, then worked in the New Republic’s Starfighter Sustainment Office for 12 years. In her downtime, she’s a hopeless fan of Figran D’an and the Modal Nodes.

We meet Dantels in Episode IX as she is pulled from Staff College to lead the accident investigation team examining the loss of the Star Cruiser Raddus at the end of The Last Jedi. Through her investigation, Dantels discovers the root cause of the ship’s loss was the fact that it had run out of fuel – a billion-credit warship being run on fumes because the Resistance had no supporting logistics and sustainment policy.

Through her extensive experience in engineering practices, Dantels discovers an entire Resistance with no conceivable fleet management policy or concept of spaceworthiness. Pilots and technicians alike take X-Wings and shuttles as they please, and leave them destroyed on missions. Unapproved cloaking modifications are commonplace across the fleet, with little or no thought to an Operational Test & Evaluation program that will determine their value or risk.

Dantels however is most troubled by the lack of human resource management within the Resistance, which she only begins to scratch the surface of. Through conversations with our heroes Finn, Rey and Poe in the Mess Hall, Dantels learns that a remarkable percentage of Resistance personnel have been captured by the First Order and then escaped – only to receive no psychological demobbing or other debrief from Resistance senior leadership team. Indeed, these personnel are released back to frontline duty with no thought to their mental welfare.

With the Resistance poised to strike a fatal blow against the First Order that will leave the tyrannical regime in tatters, it’s a race against time for Dantels to save the Galaxy from a small band of freedom fighters with absolutely no concept of organisational management or well-being of its members.

Enjoy what you just read? Please share with your friends or people you just want to spam using the buttons below.

About the Author: This post is by Eamon Hamilton (@eamonhamilton), who has a blog here.