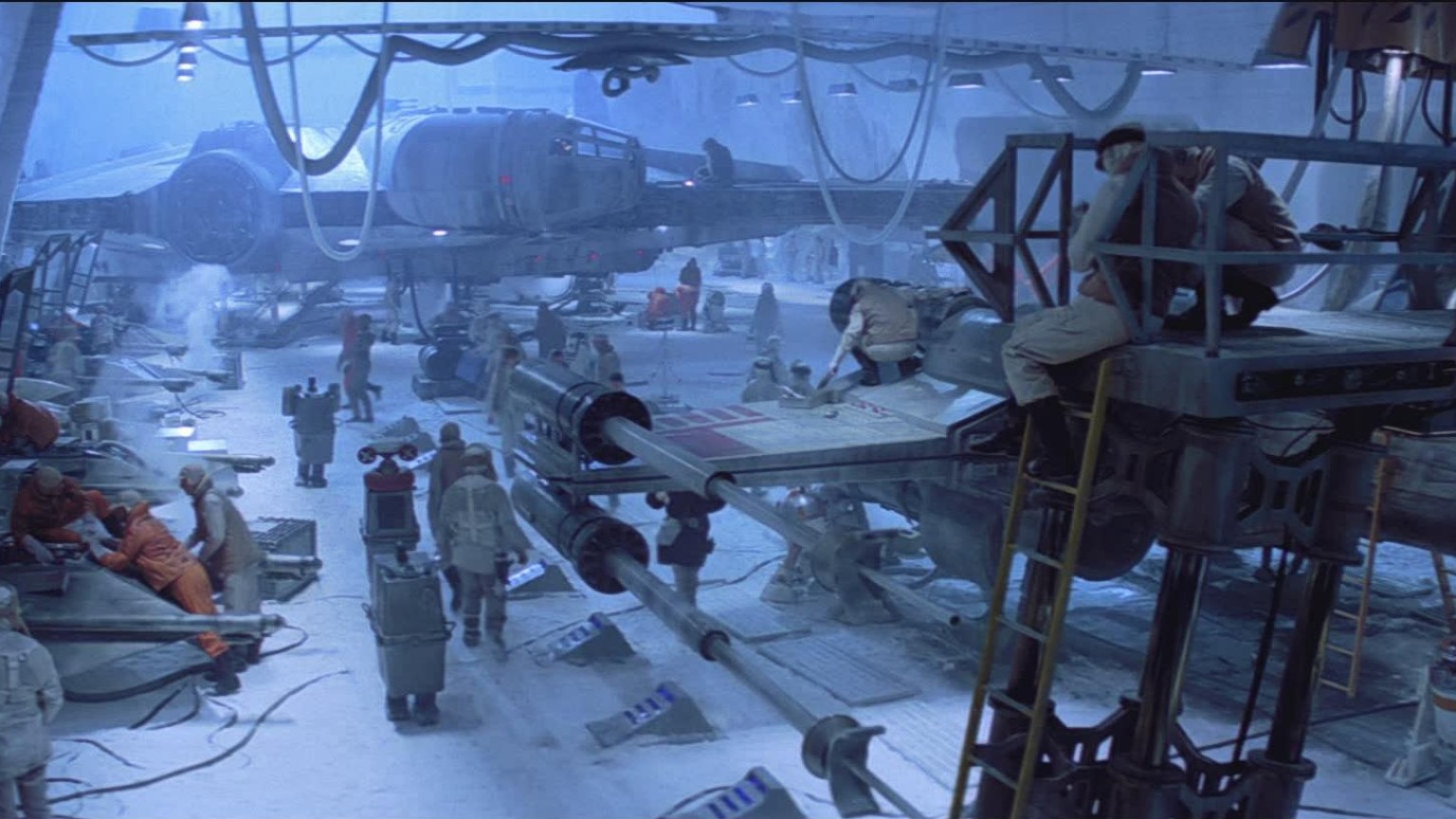 “Okay, listen up, quiet down. I said quiet down, you lot! Louder than a Bantha breeding barn in here. Just because we’re Rebels doesn’t mean we can’t have discipline. Now, because of recent…incidents around Echo Base, we’ve been directed to give a good safety brief. As you may know, Commander Skywalker is currently in MedBay because he, uh, got a little bit off course, and, uh, kinda got a bit frozen. Don’t think I don’t hear your giggles going on about officers and land navigation, Sergeant Hollis, cut that right out. Anyways, thanks to Captain Solo, Commander Skywalker is alive.

But that being said, we’ve got a pretty damn bad spot here on this blasted ball of ice, so let’s go over a few safety pointers. We don’t want to get lax out here, it’s already hard enough to live with these damn Imperials hunting us. So – remember what I always say, one troop down is one less blaster on the firing line.

Alright, so, let’s begin right here in the maintenance bays, we’ve got snow speeders, X-Wings, and all sort of flying crap all over the place. One of those could easily fall down and squash ya, so watch your step. Want to be careful around the droids as well – no telling when one of those old buckets of bolts is gonna flare up and explode, and you don’t want to be around for that mess. Not saying that maintenance company isn’t doing their PMCS, but better safe than sorry.

Okay, and speaking of hazards inside the building – well, you may have noticed that Captain Solo and our own Princess Organa have been having, uh, discussions in the hallways around here that get fairly…shouty. So, if you get caught in their wake as they’re…talking…energetically, we’ll just call it – well, just stay out of the way. We’ll all be happier that way.

Now then, operating in the cold means we’ve got to layer up when we go out. Patrols shouldn’t be out in the elements too long. Shouldn’t be longer than ten minutes between stations – take shelter at a turret, stay inside the trenches, get out of the wind. Keep the exposure down and maybe we’ll actually have a few troops left alive to fight this thing out on this frozen hell-hole.

Ok, so, for mounted patrols – we want to avoid wampa caves, those are bad. Ensure that you’ve got working comms – that means testing them before you go on patrol, remember.  Check in with Major Farr’s S-6 section for daily COMSEC, otherwise you’re only going to be talking to yourself. And patrols will be done with a minimum of two troopers each; yes, I know, squad leaders, you don’t have enough troops on hand because I keep stealing them for KP duty and blaster inventories. You can curse me out later, but both I and Lieutenant Alder from the scout platoon are in agreement on this one.

Right, so: if you get trapped in the elements on your tauntaun, well – don’t, because the cold will kill you both. But, if you do, you can use your own tauntaun as a heat source. Yeah, I know, it’s loathesome and smelly, but it’s better than being dead. Make sure you’ve got a knife on you to cut open the belly so you can use the heat inside your mount. Don’t look at me like that, I know it’s bad. This info is courtesy of Captain Solo, who swore heavily at the pilots who picked them up and said he’d shoot the first person that put a tauntaun near him again.

Right, so, we’ve covered typical accidents here in the bays, cold exposure, what to do if you get lost, and how to survive in cold weather. Before I let you go, we’ve got one last thing to cover: weapons discipline. I swear to the Force that if one other person flags me with their blaster one more time, I’m putting this whole company on sentry tower duty for a week. Stop running around with your damn worthless fingers in the trigger wells, you know these things don’t have safeties. Last week someone from 1st Platoon – one of yours, Corporal Blin – nearly put two holes in Captain Solo’s freighter – and if you know Captain Solo, you know that if that trooper had hit the Falcon, then Captain Solo would’ve put two holes in him or her. So. Weapons held at the low ready, finger only on the trigger when firing, only point the thing at something you want to kill. Back to basics, everyone, I really don’t want Sergeant Major Callum poking around the company anymore than he needs to.

Any questions? Good. Get back to your duties, I’m going to go talk to Captain Valdez to see if he can talk to Colone Firest to coordinate for some air cover on our flanks in case this thing goes hot. They’d be idiots not to bring in some flyboys in X-Wings to pot some Imperial tincans should they be dumb enough to make a landing. Of course, if they don’t give us some air support, then you all need to be keeping up with your physical fitness because you all know as well as I do that light infantry can’t do much against enemy armor other than offer nice targets. So, be speedy targets that get away. Dismissed!”