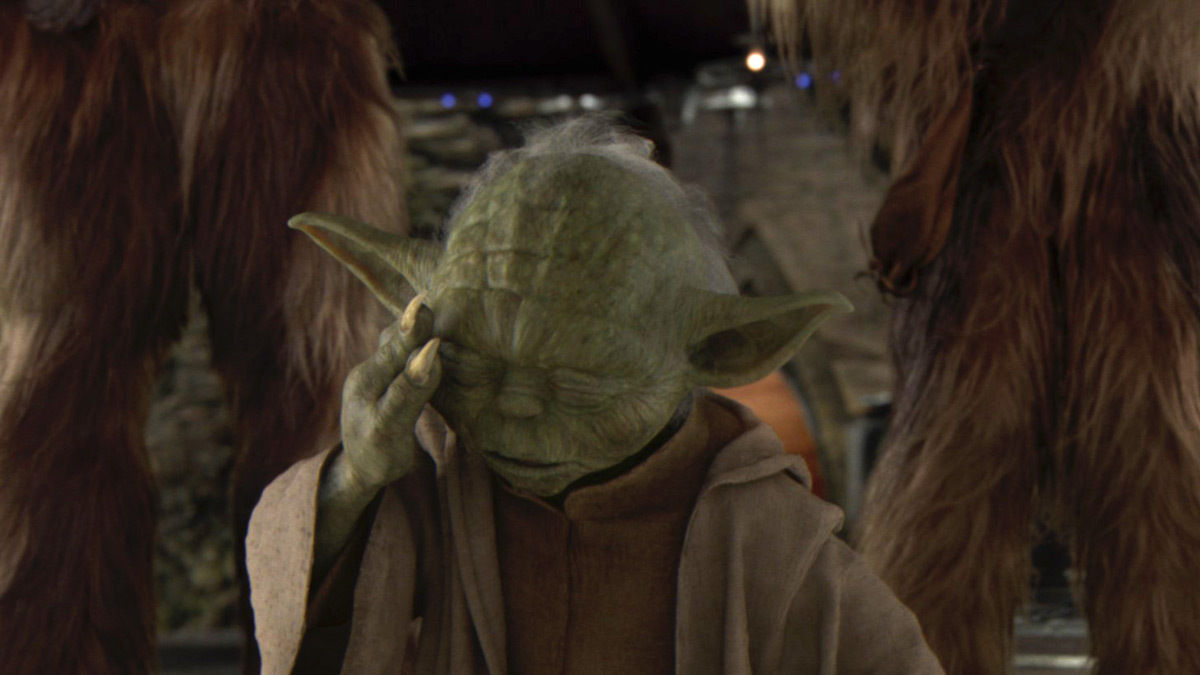 Scene: the ghostly apparitions of the Jedi Council can be seen seated around the room in the familiar circle of the Jedi council. Yoda shifts uneasily in his small seat, which is odd, because he’s a ghost .

Qui-Gon Jinn: “We’ve gathered the Joint Council for Jedi Lessons Learned together today for one single purpose: to find out what went wrong. For thousands of generations we were the peacekeepers of the Galaxy. We maintained law and order. We brought justice to planets that had never known it. We used the Force for good, saving countless lives. And then, in the span of just one generation, it all ended. How?”

Qui-Gon: “Well, yes, there was that…whole business. But that was a symptom of the overall problem. And we’ve already forgiven you for your, er, confusion.”

Anakin: “Awfully kind of you. I mean, I did kill Master Windu…and massacre the Younglings…and kill really quite a lot of Jedi when I was Vader. Sorry about that, Ben.”

Obi-Wan Kenobi: “Yeah, okay, man. Just chill out, we’ve already said it’s water under the proverbial catwalk that we all hang off of at some point in our careers.”

Mace Windu: “In order to figure out what happened, we’re going to have to do some root cause analysis. Our first step is to do an after action review, the kind we used to do with the Clone Army.”

Ki-Adi-Mundi: “Great memories with those guys. Until they killed us.”

Kit Fisto: “At least you got to die in the field, I got killed by a damned politician. A fat and nihilistic one, at that.”

Plo Koon: “Look, it’s not so glorious; I got shot down in space. Pretty undignified way to go when your own troops kill you.”

Yoda: “Bicker and argue, we must not, over who killed who. Answers we are here for. Master Obi Wan will read the rules for the After Death Report.”

Obi Wan: “Okay, we all know the rules here. What was supposed to happen, what did happen, what went right or wrong, and what we can do better next time. This isn’t a Force bitch-fest -”

Obi Wan: “Qui-Gon, I’m not your Padawan anymore, remember? You died. Sort of one of the reasons we’re here.”

Saesee Tiin: “Back in my day, we used to do three sustains and three improves. I don’t know what this kind of thing is.”

Ki-Adi-Mundi: “That was the way the Galactic Marines would do it, too. But I also saw where it was ‘Issue: Discussion: Recommendation.’ What say you, Padawan Kenobi?”

Obi Wan: “I AM A JEDI MASTER. I WENT ON MISSIONS WITH YOU ALL. AND OUTLIVED YOU ALL.”

Yoda: “Outlived not all, did you.”

Obi Wan sits down, puts his head in his hands, and is heard to swear audibly and prolifically.

Mace Windu: “Master Obi Wan is right, we must adhere to the process. How do we expect to have any lessons learned to ensure that this doesn’t happen again?”

Ahsoka Tano: “Guess I’ll start off…Um, what was supposed to happen: The Jedi Order was supposed to keep peace and justice in the Galaxy for all time, using the Force for good, and not allowing their micromanaging and risk aversion to tank the entire thing, and especially not let Mace Windu get all into my business.”

Eeth Koth: “Um, well, she’s not entirely wrong. Looking back on it now, we did kind of get all cooped up in our own selves in that tower. We spent more time either arguing with each other or fighting the Republic’s wars than we did actually listening to the people of the Republic.”

Oppo Rancisis: “And we probably could have communicated better.”

Mace Windu: “Let’s not get ahead of ourselves.”

Luminara Unduli: “Okay, yes. What did happen. Well, it was going so well until Qui-Gon adopted Anakin as his Padawan and then the whole thing went…what is the phrase they use on Tatooine? Ah yes, ‘tits up.'”

Aayla Secura: “Phrasing! But, yes, you are correct. And what went right or wrong? Well, it all went wrong. We got complacent. Somehow we neglected to have guards at the Jedi temple to stop Emo Dude -” She gestures at Anakin “- from taking out his angst on all the Younglings.”

Kit Fisto: “And we also somehow never noticed that Senator Palpatine was a Sith. Under our noses the entire time. That’s embarrassing.”

Eeth Koth: “We also should’ve worked on our tactics fighting as a group. While we can do the general thing fairly well, when we fight together as a group of Jedi, it’s really sloppy.”

Plo Koon: “If we’re doing a root cause analysis here, I’d like to offer hubris out as a pretty probable cause.”

Saesee Tiin: “And then there was the lack of communication…lies and whatnot.”

the greater good, it all was.”

A robed figure emerges from the shadows. He lowers his hood to reveal Luke Skywalker.

Luke: “You are all, without a doubt, the worst at this I have ever seen. And I’ve watched Rebel troops give AARs – most of them can’t even count, let alone reason. That’s what happens when you get a Rebellion, you get desperate. And you get a Rebellion when one group of people decides that they know what’s best for everyone else. Namely, the Jedi.”

Obi Wan: “Luke, are you just mad that you weren’t on the distribution list for this meeting?”

Luke: “Honestly, Ben , I’m more annoyed at you and Yoda lying to me for all the times you were alive and then even after that. You let me kiss my sister! Not cool, guys!”

Luke: “Master Yoda, I’m gonna stop you right there. ‘Rash’ is sending in an apprentice up against his father with absolutely no backstory, like that critical piece that he was my father. ‘Rash’ is saying that I was your only hope, but knowing I had a sister, AND THEN NOT BOTHERING TO TELL ME ABOUT HER UNTIL I ASKED A DIRECT QUESTION WHEN YOU WERE LITERALLY DYING.”

Mace Windu: “This is why you never allow the junior officers into an AAR.”

Luke: “I swear to the Force, Mace, I will kill you again. You, the man who could’ve ended the whole thing if you’d learned how not to micromanage or develop peripheral vision so you would’ve seen dad getting all crazy. Or maybe stopped crushing every single Jedi that messed up. Heads up, risk aversion creates an atmosphere of atrophy and fear. And fear – if I remember correctly from when I was doing handstands during my training – leads to the Dark Side of the Force. As does lying. Ben. Ben. Ben. Lying is bad.”

Obi Wan: “Look, yes, you’re right. And you’ve got every right to be angry. But you did win in the end, remember.”

Luke: “- and lots of really good flying from Han and Wedge, and Leia being smarter than all of us.”

Luke: “And I didn’t really win, did I? My own apprentice pulled a dad and killed all my other students.”

Anakin: “Really sorry about all the bad examples I set, really.”

Obi Wan: “You did suffer some setbacks. But where does that leave us now? You are the last Jedi. What can you learn from our mistakes?”

Aayla Secura: “He can learn to communicate – to share all information. Mission command, I think it’s called.”

Mace Windu: “He can learn to be a master of the operational art; present the enemy with multiple problems and multiple dilemmas.”

Qui Gon: “He can learn to be humble and not presume he knows what’s best.”

Luke: “Master Yoda, I’ve been using the Force for some time now.”

Yoda: “Using the Force you have been, but not to its full potential. I will now show you the full Power of the Force.”

Yoda gestures to the door and R2D2 rolls in.