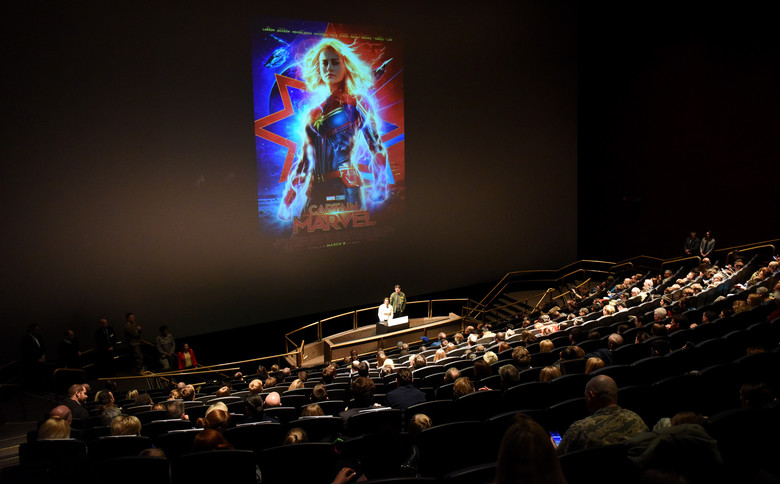 This article contains one very mild spoiler for Avengers: Endgame in the conclusion.

The unsung hero of the Marvel Cinematic Universe is the US Department of Defense. While spandex-clad special forces were running around punching things, they were steadily innovating a flexible doctrine and procuring capabilities to support it which would prove highly effective in defeating the broad range of threats to the homeland in the MCU.

Since 1995, the Pentagon was aware of the existence of extra-terrestrial threats. They also understood that Captain Marvel would not always be around to protect them. Earth needed its own defenders.

The threat faced was a substantial one. The enemy would likely be highly mobile, attack with little to no warning, and possess conventional overmatch against US forces. These concerns were reinforced beginning in 2008, with the successive emergence of Iron Man, Hulk and Thor. Fighting such entities would require radically different capabilities and doctrine to conventional warfighting or COIN – but the Pentagon was ready.

The first deficit to address was one of firepower. Captain Marvel indicated the need to up-gun, while Hulk and the Asgardian remote weapon’s platform The Destroyer were both de facto untouchable to normal weapons. Three procurement decisions were made to rectify this.

Firstly, the Jericho missile, bought in 2008 from Stark Industries. This weapon was air transportable, could be towed on a Humvee, and appears to deliver comparable effects to a MOAB from stand-off range. Tony Stark advertised it as a system to defeat terrorist cave complexes. Such a capability was of marginal utility in the Afghan counterinsurgency effort. However, if faced with an extra-terrestrial threat, it could deliver needed and highly deployable firepower to US forces.

Unfortunately, the Jericho buy was presumably cancelled following Mr Stark’s decision to discontinue arms production. Therefore, the Pentagon shifted gears to fusion devices, operationalised through the multilateral World Security Council. During the invasion of New York in 2012, it becomes clear that they possess both air and submarine launched tactical nuclear weapons. Elbridge Colby was presumably happy about this.

Following New York, however, it was clearly felt that nuclear weapons lacked precision. Although last minute course adjustments from an ODA on the ground in Manhattan had avoided collateral damage, the price almost was unbearably high. Therefore, the World Security Council – presumably with extensive US support – initiated Project Insight. This took the form of three helicarriers with prompt conventional global strike weapons, linked to a swarm of reconnaissance satellites. The result was a system which could eliminate targets either singly or en masse without needing to put US troops in harm’s way. While insufficient counterintelligence ultimately doomed Project Insight, it clearly shows that the Pentagon mounted a credible response to extra-terrestrial threat.

Firepower is no good without troops on scene to guide and wield it. During the 1995 incident, no fighters were scrambled to confront the Kree. In the 2008 Iron Monger attack, there was similarly no military or law enforcement response. Although the armed forces were present to contain the Hulk, they were only able to deploy, optimistically, an airborne company – more likely a reinforced platoon – with minimal multidomain support. This represented a significant deficit in America’s defence, and had to be addressed.

The details are unclear, but by 2012, readiness levels had clearly been increased. During the Battle of New York, light role infantry – possibly National Guard – were on scene within half an hour of the attack starting. Air National Guard and Air Force assets were not seen but given the World Security Council’s confidence that a nuclear weapon in Manhattan would end the threat, they were presumably containing the invaders to the island.

The trend in increasing readiness is also seen two years later, with SHIELD’s Strike SOF team capable of mounting a complex hostage rescue operation in the Indian Ocean out of a base in the CONUS with no notice. This speaks to an increased recognition that extra-terrestrial threats are not geographically bounded, and that conventional base infrastructure was no longer capable.

Readiness and firepower are all well and good, but the forces must also be protected and deployed globally. This was realised through two key procurement decisions.

The first was the helicarrier program. It appears that this took a CVN, and then added four rotors on the side to lift it into the air. Some might argue that this represented an extravagant waste of tax payer money – certainly, only four were ever built, signifying a hefty price tag. However, the strategic logic behind helicarriers was sound. With the enemy potentially appearing anywhere in the world, power projection by conventional carriers only into the littoral would limit US strategic flexibility. Moreover, if the enemy were to attack with no warning, an airborne command post/aircraft carrier would be more survivable than a surface warship. Such survivability was further enhanced the inclusion of optical stealth technology into the helicarrier design.

The second decision was the quinjet. Originating from post-Cold War research programs, the quinjet was a highly advanced transport/light strike aircraft. It appeared to be fusion powered and potentially capable of suborbital flight. While they could not deploy significant numbers of troops, they did allow rapid response capability – measured in minutes – at a global scale.

With all of these capabilities in place, the necessary requirements for a doctrine were in place. Although never realised, beyond a fringe case during the Battle of New York, the Pentagon’s intent appears to have been to combat extra-terrestrial threats with light, air mobile units projecting force from stealthy helicarriers. If a threat was encountered which the initial light forces could not neutralise, it would be eliminated by stand off weapons, either conventional or nuclear.

Such a capability was never tested, but wargaming suggests it would have performed admirably during the Thanosian Campaign. Unfortunately, the subsequent fragmentation of governing authorities following The Decimation prevented the force from playing a decisive role in the Second Thanosian Campaign – to Earth’s detriment.

About the Author: Matthew Ader is a first-year War Studies student at King’s College London. He’s previously written for the Army Mad Scientist Blog. He has a Twitter account (@AderMatthew) which he doesn’t really use.

About the Editor: Angry Staff Officer is an Army engineer officer who is adrift in a sea of doctrine and staff operations and uses writing as a means to retain his sanity. He also collaborates on a podcast with Adin Dobkin entitled War Stories, which examines key moments in the history of warfare. Support this blog’s Patreon here.

2 Replies to “Marvel-ling at the Pentagon: Force Design in the MCU”