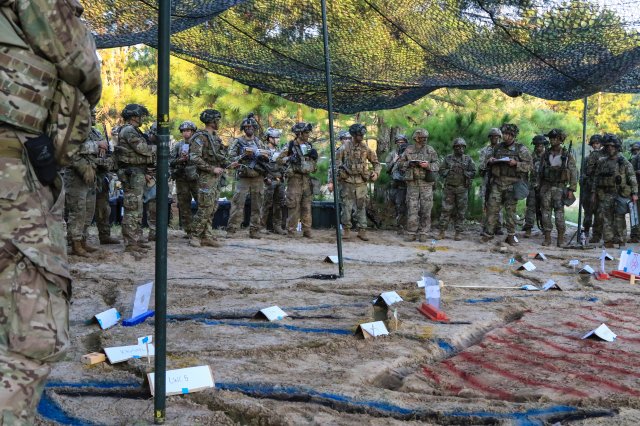 Let’s do a test.  Close your eyes and tell me what you think about when you hear the words “dreams”, “creativity”, “fantasy”, “smiles”, “magic”, and “generation”.  Odds are, you probably thought about some variation of Disney. If so, then you’re a product of Disney’s brilliant brand language strategy. A brand language is the set of words or phrases that an organization uses to accurately describe its purpose.  Walt Disney knew that his organization’s purpose was to have a safe, courteous, and efficient show for the entire family. This purpose shaped the brand language above and it is used by every employee in the organization from the board room to the theme parks and cruises.  Similarly, Army leaders within battalions and companies can do a better job of integrating brand language into their units. As the Army returns to a Large Scale Combat Operations strategy, it must relook how it effectively builds lethality and readiness at the battalion level.  One of the first areas that it can focus on is the language an organization uses in its daily activities.

For over a decade, units grew comfortable receiving cookie-cutter training support packages as they prepared to deploy to Iraq or Afghanistan where they fell in on theater provided equipment with contracted maintenance.  With those training packages and deployments came an unintended side effect; units had less accountability for maintaining their own lethality and readiness. Unfortunately, this created an entire generation of junior officers and NCOs that quit seeing everything as a training opportunity and started compartmentalizing their environments as either administrative or training.  This categorization creates a major mental barrier within large segments of our force as we look to build and maintain readiness in our ranks. Battalion commanders can do a great deal to re-invigorate and empower our junior leaders. One of the first things they can do is to change the language the force uses in day-to-day activities.

Despite the fact that every battalion has their own personality and culture, there is still a universal language for many of our daily activities.  Instead of these corporate administrative names, I recommend a more combat ready focused naming convention. Although that may seem like a superficial change, it will set the conditions that empower non-commissioned officers and company grade officers to become stewards of their ability to conduct large scale ground combat.

Before I start, I do want to say up front that this is not about using the latest Army buzzwords or some catchy phraseology.  This initiative is about getting a mindset right and knowing that the name of an activity should convey its meaning and importance to the organization.  I instituted the following changes within my battalion and immediately noticed a shift in how the activities were viewed and the priority placed on those activities.  Granted, these changes were not in name only. We also changed the structure of each of those activities to match the intended outcome, but from the start it galvanized the battalion in a shared understanding of how these events would support us towards becoming a more lethal and ready battalion.

Lethality is the ability of an individual to shoot, move, communicate, and perform their MOS-specific tasks.  Likewise, whether combat, combat support, or combat service support, units must be collectively proficient in their tasks to contribute to an overall lethal team.  In this respect, ‘Training’, as a tactical term, doesn’t really specify what battalions are working to achieve. Training, a noun, is inherently an action; while lethal, an adjective, is descriptive.  Ultimately, lethality is the ability of a unit to effectively perform its wartime mission. Renaming this will build the understanding that this is a continual assessment and reinforces the idea that everything we do builds toward lethality.  By continuing to conduct a ‘training meeting’, you are establishing the mindset that training is only something that must planned, resourced, and executed at the company or battalion level. It mentally takes the responsibility of building lethality out of the individual, squad, and platoon hands.

If lethality is the ability of a unit to effectively perform its wartime mission, readiness is the measurement of how well a unit is postured to be lethal.  As per the Army Readiness Guidance, readiness breaks down into the four pillars of manning, training, equipping, and leader development. These are in direct alignment with the traditional command and staff meeting.  The difference however is that this takes the responsibility off of just the commanders and staff and places it on the entire organization, highlighting that we are all working towards a ‘Be Ready’ posture. Likewise, it directly ties readiness to lethality.

The Army’s transition from the Physical Fitness Test to the Army Combat Fitness Test is one of the best examples of transitioning to a functional fitness culture.  While the test directly measures the ability of a Soldier to perform their combat task; it has also started to change the culture of our formations to one focused on holistic fitness.  With that, reinforce that culture by effectively calling it combat fitness.

Another way that a unit can change its culture is by renaming Command Maintenance or, even worse, Maintenance Mondays.  Both of these names send the wrong message. The first one states that the emphasis of maintenance is on the command. This takes all the stewardship of maintenance away from the operator and solidifies the idea that maintenance is an administrative garrison task.  The next term is even worse as it ties the task to a day of the week and presents that task as something time-based rather than a condition of readiness. By changing the term to Assembly Area Operations, the command starts to shift the culture from viewing that maintenance as administrative to a perspective that maintenance is training and combat focused.  An assembly area is a tactical term and it is an area where a unit consolidates, refits, and makes final preparations. It keeps the organization focused on maintaining lethality and keeps an offense-focused mindset. It also presents the framework for the organization to conduct PMCS and readiness checks on all the equipment that is part of a lethal unit, not just the vehicles.  Small unit leaders are conducting maintenance and pre-combat checks on vehicles, weapons, commo, NVGs, and other elements of combat power.

This one infects every echelon of the Army, particularly Brigade and below.  While a “task” is a joint doctrinal term that is used to support a defined mission (ie: Key Tasks, Army Universal Task List, and Tactical Mission Tasks), the term “taskings” has an administrative connotation.  Taskings are transactional activities, assigned by higher headquarters, meant to ensure the Army continues to function on a daily basis. Instead of building a team and warrior mindset, they often inhibit ownership, individual self-thought, and leader stewardship.  At the unit of execution level, taskings are met with friction, groans, and resistance. Missions, on the other hand, are also received from higher headquarters but can create a team approach to problem solving. Missions are given to a unit with s task, purpose, end state; the unit is then allowed to execute violently.  Missions invoke prior planning, troop leading procedures, and even rehearsals; all of which build empowerment and development within our junior NCOs and Soldiers.

Changing the naming convention of unit activities can change how your organization views the action.  First, the battalion can communicate actions in terms of lethality and readiness; with lethality describing a unit’s ability to perform its tactical tasks and readiness describing the unit’s posture to perform those tasks.  With that in mind, a battalion can rename meetings; from training meeting to the lethality update brief and command and staff to the readiness update brief. Likewise, the unit can reinforce a functional fitness culture by renaming PT to combat fitness.  Additionally, the battalion can continue to build combat power readiness by renaming Command Maintenance to Assembly Area Operations. Lastly, the unit can shift the unit mindset by renaming taskings to missions. While it may seem superficial, by changing the name of some of our garrison activities from administrative actions to training activities, the unit can build a culture that continually focuses on lethality and readiness.  The name of an activity is a constant reminder to all participants of the intended purpose of that event. If the intent and purpose of those events is building towards an ability to fight and win, then those events should be named accordingly. It is a direct and calculated effort that can initiate the cultural change of the formation to a unit that is focused on directed lethality and combat readiness.

Cover photo: Staff from 1st Brigade Combat Team, 82nd Airborne Division, take part in a combined arms rehearsal during decisive action rotation 19-08.5 at Fort Polk, Louisiana, July 24, 2019. The rotation serves to enhance the deployment readiness of 1BCT and supporting units in preparation for the assumption of responsibility as the Army component of the Global Response Force in the fall of this year. (U.S. Army photo by Sgt. Michelle U. Blesam) (Photo Credit: U.S. Army)

3 Replies to “Want to build a combat focused culture in your unit? Start with your language”